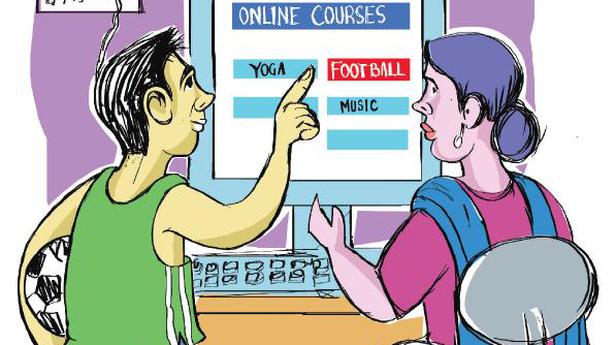 With schools restricting the duration of online classes, an increasing number of working parents are signing their children up for private online tuition and extracurricular classes to keep them engaged. The COVID-19 pandemic has resulted in teachers and trained professionals offering a variety of classes, ranging from coding to painting to dance and even football coaching lessons. This is over and above the “traditional” online classes such as training for competitive exams and academics.

While many of the companies offering classes have switched to online mode because of the pandemic, many teachers and artists who have seen a reduction in their salaries or lost their jobs have decided to open their own enterprises and have designed online classes. Families who can afford it are using the opportunity to acquire new skills. Mitali Joshi, a designer and digital marketing expert who founded the Bengaluru-based company Your Future Skill, has started conducting Adobe Illustrator courses for students. “I decided to do this on the side, and have already conducted training for two batches. It is a five-day course which will end with an assessment. Students will get a certificate,” she said.

Karan Bajaj, founder and CEO, WhiteHat Jr., which conducts courses in coding, said they had seen a surge in demand for online classes. They have four levels where children learn logic, structure, and algorithms to eventually make animations and applications. “While the beginner course involves building apps with logic and abstraction, at the intermediate level students learn to develop advanced art and single-character games. They finally move to the advanced and professional level courses,” he said.

Parents pointed out that they were signing their children up for more extracurricular activities as they were saving a lot of time on commute. “Before the pandemic, my teenage son had football classes twice a week, and a weekly painting class. Now, besides these two classes, I have also signed him up for coding and yoga as he needs to be occupied through the day,” said Ramya S.

Parents acknowledged that the time their children were spending sitting in front of a computer screen had shot up dramatically, but there was no other choice.

Not all online classes are popular, especially those trying to coach children in sports. For instance, online football classes involve students learning and practising skills such as ball control, single leg tic tac, double leg tic tac, step over, and so on. Renu Bhatt, one of the founders of Stadium FC which was started in 2010, said they had seen a reduction in the number of children opting for online classes compared to previous years. “We have designed drills that students can do in a small area. We focus on their fitness and technique, and students can take the classes from a small room in their house. Although we have kept in mind logistics, online football coaching is not a big hit among students. They want to come out and play on the field,” she said.

Parts of Bengaluru flooded after 3 days of heavy rain