Home Cities Hyderabad Suspicion over role of registration staff too 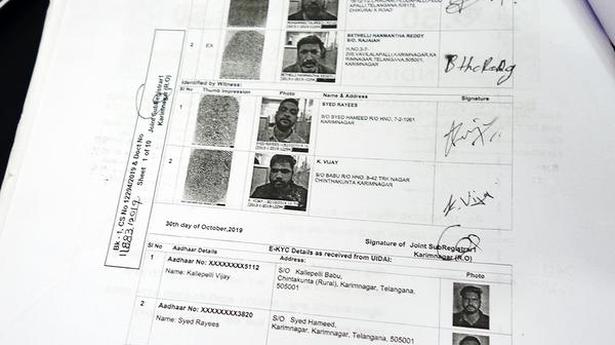 The needle of suspicion in sensational land-grabbing cases in Karimnagar district is pointing to employees of not the just Revenue department. In some instances, glaring negligence of some Registration department employees too has come to light.

A case in point is that of a retired deputy tahsildar B. Hanamatha Reddy. He purchased nearly 1,200 square yards of land in Vavilalapally in 2018 and got it registered. A few weeks ago, he learnt that land grabbers not only occupied his land but got registered it through two sale deeds using imposters in his place. He approached the Karimnagar police who registered a case.

The modus operandi of using an impostor in the place of a property owner (who is described as vendor in registration documents) is not unusual. But the failure of the Karimnagar Sub-Registrar office to notice the ‘cheating crime being committed before them’ raised eyebrows. The conspirators created a fake Aadhaar card in Hanamantha Reddy’s name.

But they used imposter’s photo and his original Aadhaar card number. They did this because during registration the authorities check thumb impressions of vendors which are verified through Unique Identification Authority of India (UIDAI) server.

During the mandatory process of E-KYC, the Aadhaar details of the vendor get displayed on the sale deed. The same is printed on the registered documents. In Hanamantha Reddy’s case, the accused got two sale deeds registered and used two imposters.

“This could not have been done without the connivance of Registration department employees though they might say it is an oversight,” said Lok Satta president N. Srinivas. The quickness of the Registration department in registering a sale deed and another general power of attorney of the same property (a graveyard) on the same day within a gap of an hour also leaves a lot to be desired about their employees,”says Bommakal ward member Thota Kiran Kumar.

This land was surrendered by the late former legislator and being used by people as graveyard. The Revenue department issued proceedings on that land this March. Based on the proceedings, the land was registered in the names of the late former legislator’s two family members on June 4. The same day, another document was registered, creating a sale deed-cum-general power of attorney in the names of some private persons.

This transaction too has come under the scanner of the police and revenue departments in the inquiries into land grabbing cases in Karimnagar.

Hyderabad at the fashion weeks