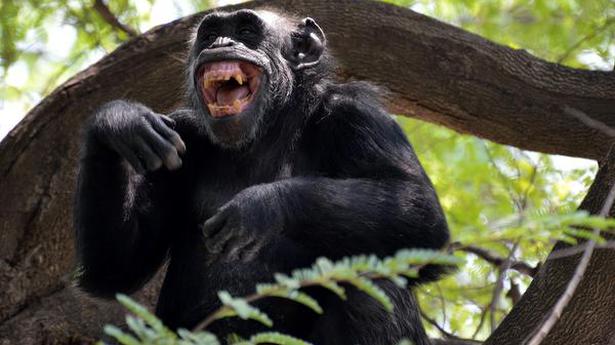 It is Suzi’s birthday on July 15. But this year, she cannot have her chocolate cake.

The popular female chimpanzee at Nehru Zoological Park in Hyderabad, who turns 34-years-old then, will be celebrating with zoo officials, staff and her caretakers Prasad and Raju. Usually, the zoo orders her favourite chocolate cake for the occasion.

Suzi, the beloved chimpanzee at Nehru Zoological Park in Hyderabad ahead of her 34th birthday


However, this year the zoo curator, N Kshitija says, “Due to the pandemic we are not taking chances and ordering any food from outside. Thankfully there is another favourite dish of hers which can be prepared by the zoo staff — mixed fruit salad. She also loves mosambi (sweet lime) juice. So she will get extra helpings of fresh mosambi juice on her birthday.”

He adds that like every year, they will decorate Suzi’s enclosure and machaan (platform atop a tree) with a fruit garland. “She loves all this extra attention and the special things her caretakers do for her. The staff is also excited at making her feel special.”

Last year, Suzi’s birthday was celebrated in the presence of school children and visitors who sang her the birthday song. Kshitija says she misses the crowds during the lockdown and loves it when a group of zoo officials visit her from time to time. “She makes it a point to show her happiness by grinning, jumping or doing somersaults on the ground,” he adds. Suzi, the beloved chimpanzee in a playful mood at the Nehru Zoological Park in Hyderabad on August 8, 2014.
Photo: V.V.Subramanyam

Suzi had once belonged to Subrata Roy, the chairman of Sahara Parivar India. She was brought to the Hyderabad zoo in 2011 and is the only chimp in the zoo. Her enclosure is built in about half an acre of land. “We have included many features to keep her engaged and happy. She has a swing, a rope ladder , a machaan and a hut for her to rest outdoors,” adds Kshitija

Although the pandemic may have deprived her of cake, Kshitija promises that she will still get a bar of Cadbury chocolate, which is her favourite, to make her happy.”

On normal days her diet includes her favourite fruits with breakfast cereals and a cup of coffee in the morning after she is done with brushing her teeth. Suzi’s little luxuries include a freshly washed blanket everyday and a good oil massage on two or three days a week. And yes, she likes using a specific toothpaste: Pepsodent.