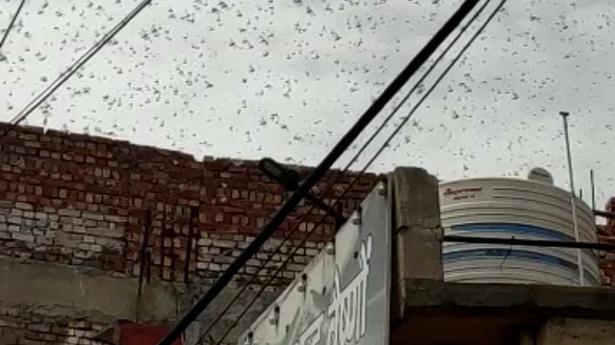 Swarms of locusts hit Millennium City on Saturday around noon while they were headed towards Delhi in two separate groups. The State Agriculture Department on Friday issued an advisory in this connection and asked the residents to keep the windows and doors shut.

Deputy Director, Agriculture, Gurugram, Atmaram Godara, told The Hindu that the locusts were headed towards Delhi from over Kherki Daula toll plaza and the railway station. Large numbers of locust had flown from Mahendragarh on Friday evening and settled in four-five villages in neighbouring Rewari, around 50 km from here.

Videos taken by locals showed the locusts flying over the areas in DLF Phase-II and III in large numbers and sitting on trees and roads in different parts of the city.

Mr. Godara claimed adequate preparations were made to deal with the situation and enough number of staff members deployed. He added that around 200 farmers in the district had spray pumps installed on their tractors.

The minister also directed the administration to be alert, an official said.

“After the emergency meeting, an advisory will be issued on steps to be taken to deal with the situation,” Rai told PTI.

He asked the officials of the Agriculture department to make field visits to areas close to Gurugram.

The development secretary, divisional commissioner, director, Agriculture department, and the district magistrates of South Delhi and West Delhi will attend the meeting, the official said.

Earlier in the day, the skies over many parts of Gurugram turned dark as swarms of locusts descended on the town.

However, the migratory pests are likely to spare the national capital for now, officials said.

The swarms of locusts, spread across two kilometres, moved from west to east. They entered Gurugram around 11.30 am, K L Gurjar of the Locust Warning Organisation, Ministry of Agriculture, told PTI.

The pests, he said, were headed towards Faridabad and Palwal in Haryana.