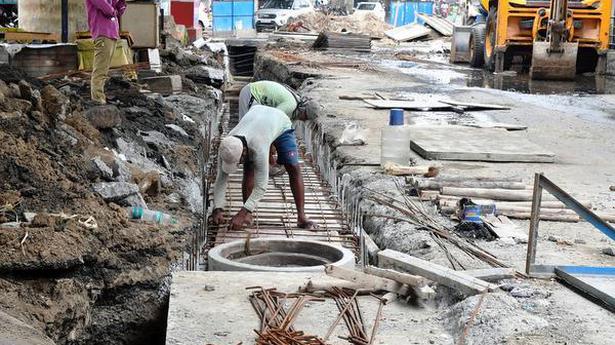 Work relating to widening of the existing stormwater drains on key roads in T. Nagar seems to be gaining pace thanks to the limited movement of people and vehicles due to the lockdown.

Greater Chennai Corporation is expected to complete the work before the onset of the northeast monsoon. As a precautionary step, workers undertaking the project were allowed to stay near the work site with necessary protective gear including face masks, gloves.

Many motorists from Ashok Nagar, K.K. Nagar, Vadapalani, Nesapakkak, Virugambakkam, Valasaravakkam, Porur and Ekkatuthangal use some of these roads including North Usman Road and the flyover near Panagal Park to reach shopping areas such as T. Nagar, Pondy Bazaar and Teynampet. They also use these stretches and the flyover to reach the central parts of the city. Many motorists, especially those coming from Ashok Nagar, Kodambakkam and Vadapalani prefer to take these stretches and head via Duraiswamy subway to central areas instead of the congested Arcot Road.

These stretches and the flyover together connect Duraiswamy subway with Fourth Avenue Main Road near the Ashok Nagar police station.

“Early completion of the drain work will help prevent flooding of the houses. Pedestrians would also get wider footpaths once the drain work is completed,” says S. Suresh, a motorist from Kodambakkam.

Designed under the Integrated Storm Water Drain project, the existing drain is being made three feet wide and four feet deep so that it discharge excess rainwater through a series of inlets. Soak pits are also being built to recharge the water table with the rainwater. Discharge of illegal sewage into the stormwater drains is also said to have been checked by the civic body. The floor level of the drain has been raised to height one foot above the existing road level. However, the inlets to the drain have been built on the same level as the surface of the road to ensure discharge of runaway rainwater into the drain.