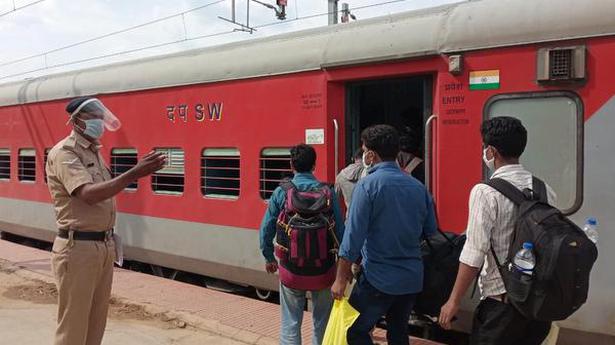 The initial decision to make migrant workers pay high fares for berths was heavily criticised. They were forced to pay huge amounts for train tickets and city bus fares to reach railway stations. In the initial days, the BMTC used to collect fare from migrant workers and transfer the rail ticket price to the Railways. On May 22, Chief Minister B.S. Yediyurappa announced that the State would bear their travel cost.

A majority of the migrant workers who left Karnataka were from Bihar. Data collated by the SWR shows that 1.07 lakh people returned to their native places in Bihar in 73 trains. Uttar Pradesh accounts for the second largest migrant movement: to date, 73,498 people from that State who were working in Karnataka travelled to their home towns in 51 trains. This is followed by West Bengal (40,395 migrant workers), Jharkhand (30,962), and Odisha (24,357).

The least number of trains — one each — were operated to Kerala, Nagaland, and Mizoram.

A release from the SWR stated that since May 3, Shramik Special trains were operated from Karnataka to 17 States. Till June 13, around 229 trains ran from various points such as KSR Bengaluru, Bengaluru Cantonment, Chikkabanavara, Malur, Ashokapuram, and Hubballi.