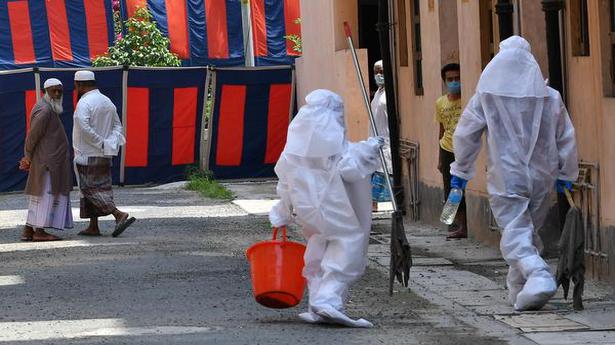 The Delhi High Court Tuesday allowed shifting of 65 foreign nationals connected to the Tablighi Jamaat, who participated in the religious congregation at Nizamuddin Markaz event during the coronavirus lockdown, to alternate accommodation.

A Bench of Justices Vipin Sanghi and Rajnish Bhatnagar passed the order after the counsel for Centre, Delhi government and Delhi Police gave the statements that they do not have any objection to it.

The high court allowed the plea to shift 65 foreigners from the existing accommodation to another as they were facing certain issues including unhygienic condition.

The Bench, which conducted the hearing through video conferencing, allowed the application for modification in the high court’s May 28 order by seeking to include three more places of alternate accommodation for the foreign nationals connected to Tablighi Jamaat in light of ongoing criminal proceedings.

On May 28, the high court had directed that 955 foreign nationals, who had participated in the Markaz, be shifted from institutional quarantine centres, where they were kept since March 30 despite testing negative for COVID-19, to nine alternate accommodations.

The plea, filed through advocates Mandakini Singh and Ashima Mandla, said that during the course of the month, 65 foreign nationals housed at Meeraj International School have faced discomfort with regard to the arrangements there.

On Tuesday, the high court allowed them to be shifted from Meeraj International School to Texan Public School in Moujpur here, a new accommodation suggested by them.

The Bench also observed that for such modifications the petitioners need not approach the high court directly in future and they give the representation to the Delhi Police which will forward it to the Union of India for a decision and the entire process should be completed in one week.

The application also said, Apart from the Texan Public School, the community has now identified two additional places of accommodation, which may be used in the future, if need be, to house any of the 955 foreign nationals in question. The community once again undertakes to bear all costs for shifting accommodation and further duly notify the Respondent No.4 (Delhi Police) of the whereabouts of the foreign nationals.

The high court had on May 28 disposed of two petitions filed by various foreign nationals seeking to be shifted to alternate accommodation and stating that the financial burden will be borne by the community, Tablighi Jamaat.

The high court had warned that they should not shift to any other location without the permission of Delhi Police.

Delhi Police had told the high court that 47 charge sheets have been filed in respect of 910 foreign nationals belonging to 35 countries.

After being exposed to a large gathering in March amid the COVID-19 or coronavirus lockdown many members of Tablighi Jamaat from Markaz Hazrat Nizamuddin were taken out by the authorities and lodged in different quarantine centres in Delhi. Some of them were sent to the centres a few days later after being detained from various mosques.

In April, COVID-19 cases in Delhi spiked after hundreds of many Tablighi Jamaat members, who had attended a large congregation in Nizamuddin, tested positive.

The other members were directly taken to quarantine centres to contain the spread of COVID-19.