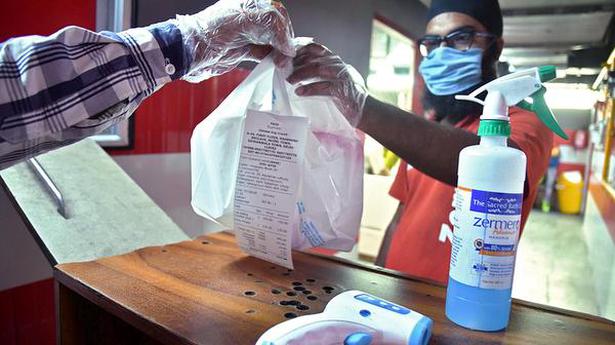 Staring at a bleak future, despite getting the green signal to open, the only way to fetch some revenue during the lockdown for restaurants has been through home deliveries and takeaway. Burdened by huge fixed costs, restaurants are going all out to quell customer sentiments by launching measures like contactless delivery, introducing hygiene ratings, and live streaming of kitchens among others to ensure that COVID-19 does not spread.

Despite this, restaurant owners lamented that customers are still apprehensive and business is nowhere close to profitable. They realise that it would take a while before they see customers walking in. Their hopes now hinge on the delivery business improving.

With most offices and educational institutions shut, many fast food joints and quick service restaurants have taken a hit as people no longer want to pick up a meal on the go. Jaspal Singh Sahni, owner of Kents restaurant in Defence Colony, said that during the initial phase of the lockdown, he could not open his restaurant as most of his staff were unable to commute from their homes.

However, after restrictions were eased, he could garner 50% of the staff. “Business has been hit as it is only my regular customers from the residential colony who are ordering in and coming to pick up orders. But at least with takeaway, I have been able to pay the salaries of my employees. Something is better than nothing,” Mr. Sahni said.

Anmol Rampal, who runs a chain called Hungry Tau in Gurugram, admitted that diminished business over the last three months meant difficulty in maintaining the staff. “We have around 33 people and they were all given salaries during the lockdown period. However, the situation is becoming increasingly difficult. To add to this, support from the government has been nil with no benefits whatsoever for MSMEs,” said Mr. Rampal.

Out of his four outlets in Gurugram, only one is operational to restrict the prospects of staff getting infected. “We do not want to take a chance as everyone is very scared at the moment. We have the same set of three people working for us every day and they even stay together. This arrangement has been done to limit the chances of getting infected. Full PPE kits are also provided to the kitchen staff and the entire restaurant is sanitised every third day,” explained Mr. Rampal.

In a bid to reduce customers’ apprehension, several outlets are developing user-friendly apps that would stream a live feed of the kitchens. Ashwin Jain, co-founder of Instapizza, an online pizza delivery platform said: “Due to the rapid spread of COVID-19, people have become more hygiene and cleanliness conscious, leading to less ordering of food from outside. To ensure customers can see what is done while baking the crusts, Instapizza has introduced #CrustFlix, where they can live stream what’s cooking in the kitchen.”

With eight outlets operational in Delhi-NCR, Mr. Jain said that business had picked up marginally since Unlock 1.0 was announced. “Weekends are comparatively better than those in the lockdown. But it is nothing close to pre-lockdown days,” said Mr. Jain.

Apart from partnering with online delivery partners, the pizza outlet also maintains its own fleet of delivery executives who carry extra pairs of gloves and sanitisers with each delivery, said Mr. Jain. “The delivery executives sanitise themselves before each delivery and they have been instructed to wear a fresh pair of gloves before opening the bag. We also provide a small sanitiser with each pizza box so that the customer can sanitise the box if they feel like. For delivery executives of other platforms, temperatures are checked each time and in case of any anomaly, it will be reported to the platform concerned,” said Mr. Jain.

For smaller takeaways like the one in Kalkaji, offering Chinese cuisine, has been difficult even after the relaxation of restrictions.

“We do not have a dine-in facility and have always been only delivering food. We have been badly hit as people are very scared to order these days. Most of our regular customers are also preferring to stay away for some time. Every time we get a query we try to assure them that all kinds of precautions, including masks and sanitisers, are taken by everyone,” said a staffer of the joint.

Suraj, a delivery driver with Swiggy, said that business had been terrible during the lockdown. “We used to get paid ₹500 a day regardless of the number of deliveries earlier, now it has come down to ₹300 a day,” said Suraj.

Under the lockdown, the company had reduced their salaries, and with clients turning fearful, Suraj admitted that the number of orders had drastically fallen.

Another delivery driver Raju, a resident of Khanpur, concurred. “It all went bad when that pizza delivery guy in Malviya Nagar fell ill,” he said.

Prior to that case, which led to the quarantining of nearly 70 people, business was brisk. “Earlier, we would get paid ₹35 a delivery, that rate has been brought down to ₹15 a delivery since the beginning of June. Earlier, I would earn about ₹16,000-17,000 a month. Now I just hope to manage basic expenses like food,” he said.

Online delivery platform Zomato said that the number of restaurants and delivery agents who continued to operate at the beginning of the lockdown was very low as most people were trying to cope with the virus and measures to keep oneself safe. “However, the number has grown steadily since then and is already at about 50% for both restaurant partners and delivery fleet,” the company said in a statement.

In the context of the pandemic, Zomato said that there had been a growing preference towards restaurants that followed safety protocols such as contactless delivery, temperature checks, sanitisation of kitchens and the mandatory use of the Aarogya Setu app. It added that restaurants which had a hygiene rating saw a 20% less impact on their business during the pandemic as opposed to those that didn’t.

While many restaurants had to temporarily shut down during this period, a spokesperson from Swiggy said that through the lockdowns one to four, there has been a consistent increase in the number of restaurants opening up along with an increase in the number of customers. Additionally, the company said that it has on-boarded hundreds of new restaurants that were earlier heavily focused on dine-in services and were not available for online delivery. “These include marquee hotels such as Marriott, Hyatt, and ITC Hotels to name a few,” the spokesperson added.

To ensure safety standards, the company continues to encourage ‘no contact’ deliveries on all prepaid orders and highlights restaurants adhering to strict safety guidelines, it said.

The National Restaurant Association of India (NRAI) said that it has been in talks with both Central as well as State governments seeking policy and liquidity support for the beleaguered Industry as it does not expect the volume of business in the post-pandemic period to be more than 30% to 40% of the pre-lockdown numbers.

The association said that the lockdown had made it realise that it is important to take larger control of the digital world to provide ordering and billing solutions for the long-term well-being of the fraternity by identifying aggregator alternatives. It said that restaurants were being left at the mercy of aggregators which were the “new-age digital landlords” and it has started making efforts to come up with its own tech-solutions that would benefit restaurant owners instead of a few “digital giants”.