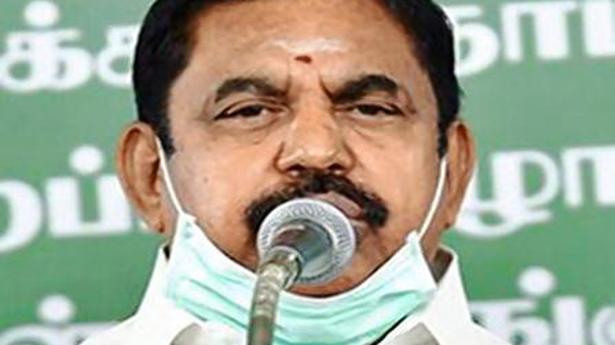 After political parties in Tamil Nadu voiced concern, Pt. Deendayal Upadhyaya Institute of Archaeology has included a master’s degree in Tamil as a qualification for its two-year postgraduate diploma course in archaeology.

In his letter to Prime Minister Narendra Modi, a copy of which was released to the media, Chief Minister Edappadi K. Palaniswami said: “I would like to express my heartfelt thanks for the immediate response to my request… I appreciate the prompt response and once again thank you for the immediate action in the matter.” Mr. Palaniswami had written to Mr. Modi on Thursday evening.

In a corrigendum to its admission notice issued on October 8, the Joint Director-General of Pt. Deendayal Upadhyaya Institute of Archaeology has said the qualification norms have been altered, including Tamil this time. According to the corrigendum, anyone with a master’s degree in all classical languages notified by the Government of India — Tamil, Sanskrit, Kannada, Telugu, Malayalam, Odia and Pali, Prakrit, Arabic or Persian — would qualify for the course.

Madurai MP Su. Venkatesan, who was the first to highlight the issue, has welcomed the decision. “Injustice that attempted to render Tamil students unqualified and deny them entry into the Archaeological Survey of India at its very doorsteps has been thwarted,” he said.

He recalled that several parties and organisations had condemned the notice that did not include a master’s degree in Tamil as qualification for the course.

Among the qualifications listed for the course were a master’s degree in Ancient or Medieval Indian History/Archaeology/Anthropology, Indian Classical languages such as Sanskirt, Pali, Prakriti, Arabic or Persion or in Geology with knowledge of Pleistocene age from a recognized university.

Subsequently, Chief Minister, Edappadi K. Palaniswami wrote to the Prime Minister on this issue, appealing him to include PG degree in Tamil also in the list of qualified courses.

“It was Tamil Nadu that had raised its voice against the injustice meted out to the classical languages other than Sanskrit,” the CPI(M) MP said.

Mr. Venkatesan also said the Centre should dissolve the expert committee constituted by the Ministry of Culture to conduct a study of the origin and evolution of Indian culture. The announcement on the committee also ran into criticism. The Chief Minister drew the Prime Minister’s attention to the fact that the committee did not have any representative from the southern States.