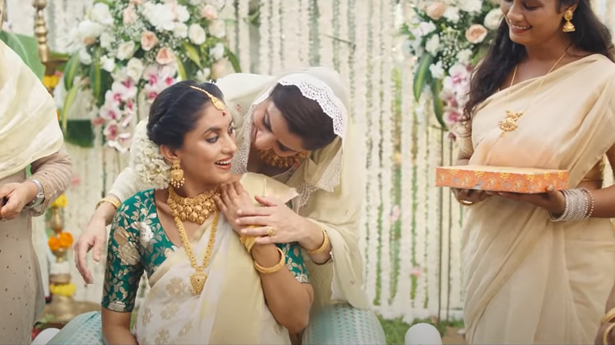 Buckling under pressure, Tanishq, the jewellery brand by the Tata Group, has withdrawn its latest advertisement following criticism from a section of social media users alleging that the advertisement promotes ‘love jihad’ — a derogatory term used by fringe groups to define interfaith relationships.

The hashtag #BoycottTanishq was also trending across social media sites such as Twitter since Monday. However, Tanishq’s move to pull down the advertisement also drew criticism for “caving in” to the “trolls”.

The advertisement, released ahead of the festive season, shows a baby shower being thrown by a Muslim family for their daughter-in-law, who is a Hindu. Towards the end of the video, the young woman points out to her mother-in-law that baby shower is not a tradition in their household, with the mother-in-law replying: “Isn’t it a tradition for every home to keep daughters happy?”

The brand is yet to come out with an official statement on the issue.

Meanwhile, reacting to the issue, Congress MP Shashi Tharoor tweeted, “So Hindutva bigots have called for a boycott of @TanishqJewelry for highlighting Hindu-Muslim unity through this beautiful ad. If Hindu-Muslim “ekatvam” irks them so much, why don’t they boycott the longest surviving symbol of Hindu-Muslim unity in the world — India?”

Likewise, author Shobhaa De said, “Good for you @TanishqJewelry. If only we had more ads like this sensitive and brilliant one promoting love between different communities, India would be a far better place for all. Shame on trolls #downwithbigotry.”

Agreeing to Ms. De’s tweet RPG Group’s Harsh Goenka said, “What a lovely ad is being trolled. What’s happening to us?”

Vardhan’s comments should not be taken as criticism of Kerala’s COVID-19 management, says Pinarayi Vijayan