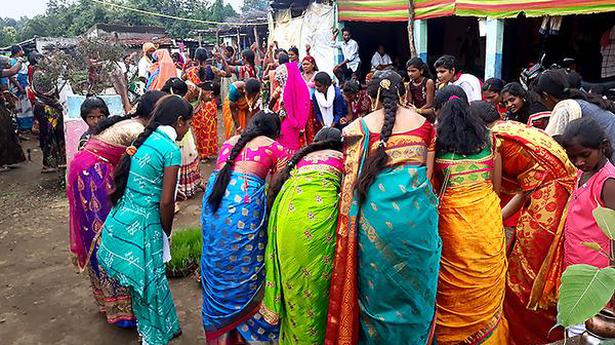 Dancing to melodious songs, the colourful nine-day annual traditional festival called Teej, celebrated in erstwhile Adilabad district concluded on a grand note on Wednesday. The festival is prominent in the hamlets populated by the region’s Banjara and Mathura communities.

It holds significance for the married women from Lambada tribes and Mathura community. Unmarried women ‘raise’ the Teej, wheat grass in bamboo baskets, for a good life partner and blissful married life, while wives partake to pray for the well-being of their husbands. Also known as ‘Khaithi Labana’ in Mathura community, the nine-day festival begins on Rakhi Purnima in the auspicious month of Sravan with women sowing wheat in bamboo baskets at their houses.

They take part in the festival with utmost devotion for the well-being of their family members and entire village. Clad in traditional attire, the women water the seeds everyday, which sprout up as wheat grass in less than a week.

On the ninth day of festival, the final day, the women folk place the wheat grass baskets at Naik or Maharaj’s house (village chief), sing the traditional songs and dance, circling the Teej, before they are immersed in water bodies, said Noor Singh of Khandala, a tribal village, located about 25 km from Adilabad town.

He said that the women worship Goddess Jagdamba and seek her blessings. “It is our culture. The women have been taking part in the festival for centuries now. Men help them during the entire ritual,” Mr. Singh said.

“Every year, I’m very much excited for Teej. We go to agricultural fields, get black soil, sow the seeds on the bamboo baskets, worship the goddess for nine days and on the last day, we sing and dance by wearing our best clothes and jewellery,” said a young woman, who was rushing to the village chief’s house as she was getting late for the celebrations.

The festival is similar to Bathukamma, but lacks popularity, said Sandeep Jadav, a youngster from same village.