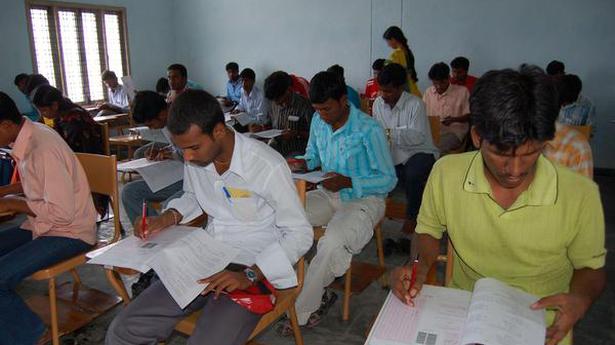 All Common Entrance Tests in Telangana for admissions into different courses, including the POLYCET 2020 scheduled for Tuesday were postponed by the government.

Telangana High Court hearing a PIL plea seeking deferment of entrance tests in the State was informed by Advocate General B.S. Prasasd that the next dates of the exams would be announced in due course. The AG conveyed the decision of the State government to a bench of Chief Justice Raghvendra Singh Chauhan and Justice B. Vijaysen Reddy which was hearing the PIL plea.

National Students Union of India state president B. Venkat Narsing Rao had filed a petition seeking a direction to the government to postpone all common entrance tests in the State in the backdrop of COVID pandemic. After hearing the petitioner’s counsel C. Damoder Reddy’s contentions in the morning, the bench sought to know from the AG the likelihood of government re-clamping lockdown in Hyderabad, citing media reports.

The AG sought time till 12 noon to ascertain the government stand on the matter. When the bench re-assembled at noon, he informed the court that the State Cabinet was likely to take a call on the lockdown in a day or two.

To CJ’s query on the petitioner’s contention on deferment of CETs, the AG again sought time till 2.30 p.m., stating that the Chief Secretary was in consultation with all departments concerned on the matter. When the bench re-assembled at 2.30 p.m,, the AG announced the decision of the government to postpone all entrance tests. Unaware of the government decision, the counsel for State Board of Technical Education and Training Venugopal appealed to the bench to permit POLYCET to be held on Tuesday.

As the counsel repeatedly appealed to the bench to allow the test, the AG had to intervene and tell him not to represent on the matter making it clear that government had already decided to defer all entrance tests. Referring to the undergraduate and post-graduate courses under Jawaharlal Nehru Technological University, its counsel said a proposal to take average marks of all the seven semesters and the eighth semester were to be taken as the base for promoting students to the next semester.

If the students were not satisfied with the grades awarded on the average of the previous semesters, they would be permitted to appear for the exams to be held in future. The matter was conveyed to the Higher Education department which had conveyed the same to the Telangana State Council for Higher Education to take the final decision. Meanwhile, the Osmania University counsel said that he would secure instructions from Higher Education department on conducting exams to under-graduate and post-graduate courses. The bench directed the counsel to convey the university’s decision on the matter which would be heard again on July 9.

Coronavirus | Too many patients, too few care providers

500 families hit hard by lockdown as Chappal makers in Thakkar...