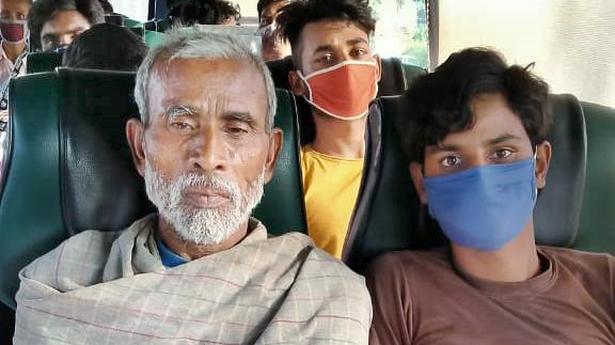 Mohammed Ebrahim, 65, from Bhulni village in Araria, Bihar, became a symbol of the migrant crisis when a video of him crying at Gurugram’s Tau Devi Lal stadium went viral in the first week of June. Mr. Ebrahim, like many others from Bihar, was asked to go to the stadium, from where migrants were to be taken to the station to board a train. Due to a delay, they ended up spending about a day and a half there, in the heat.

Shalu Johar Sahni, a Gurugram resident and entrepreneur, who is associated with Pure Hearts, a not-for-profit, and Helping Hands, an initiative by civil society, saw him there one morning, when they went on their usual rounds to distribute food. “Most of the time we would ask the people from the crowd to pass around the chhaas and rusk, but that morning I happened to hand it to him. But he wasn’t reaching out in the right direction,” she says.

She found that the elderly man was blind, that his grandson-in-law was taking partial care of him, and that he had come to Rewari, Haryana, a few weeks before the lockdown. “He felt he had lost his eyesight because of the smoke from heating the tar to build roads, a job he was doing,” says Ms. Sahni, who promised to help him in whatever way she could.

While he made the approximately 20-hour bus journey and the two-hour tempo ride home, many phone calls were being made in Delhi-NCR.

Ms. Sahni reached out to former journalist Swati Sinha, another Gurugram resident and fellow volunteer. “I called a relative, Jatin (Singh), because I thought he may know someone in that part of Bihar,” says Ms. Sinha, who hails from the State. His cousin’s wife Pratishtha Singh, a writer, then got in touch with old friend and fellow JNUite Shakeel Ahmad Khan, an MLA from Kadwa in Katihar, Bihar.

“He put me in touch with Sibtain Ahmad, who runs a career coaching centre in Araria,” says Ms. Singh, adding that he then arranged for Mr. Ebrahim to be taken to a doctor, and then another for a second opinion, locally.

Since the doctors had diagnosed the problem as a retinal detachment, they suggested he be taken to a bigger place like Patna or Siliguri for surgery. “We found out that because of the COVID situation, the Indira Gandhi Institute of Medical Sciences in Patna was not performing non-essential surgeries,” says Ms. Singh.

So they settled on the Retina Institute of Bengal in Siliguri.

A transfer of money by Pure Hearts directly to the medical facility and also to Mohammed Saibul, Mr. Ebrahim’s son’s account took place. Dr. Somnath Chakraborty of the Siliguri institute advised against surgery in the right eye, but said there was some chance for the left.

On June 15, father and son made the trip in a hired Scorpio to Siliguri, going back home the same day.

“It was probably caused by a combination of old age and a cataract surgery that had complications,” says Dr. Chakraborty, who performed the retinal detachment surgery.

The next morning, Mr. Ebrahim could see partially in his left eye, and could go to the bathroom without assistance. “I have done construction work in Ludhiana about 15 years ago,” he says, of time spent away from home in the past.

His son says this time there was a fight at home, and his father, who he claims has a temper, left home, his wife, son, daughter-in-law, and six grandchildren in a huff.

Mr. Saibul says he had no idea where his father was in Haryana, when he got stuck between a lockdown and losing his eyesight.

It took a trail of people from diverse backgrounds, many phone calls and WhatsApp messages and a ton of coordination to help a man none of them knew. “We are a first world that lives within the third world. Like a lazy middle-class person I thought I could pay my way through everything, but this experience has taught me that if we just come together and talk to each other, we can get a lot done,” says Mr. Jatin Singh, founder-MD of Skymet and founder of Gramcover, in Noida.