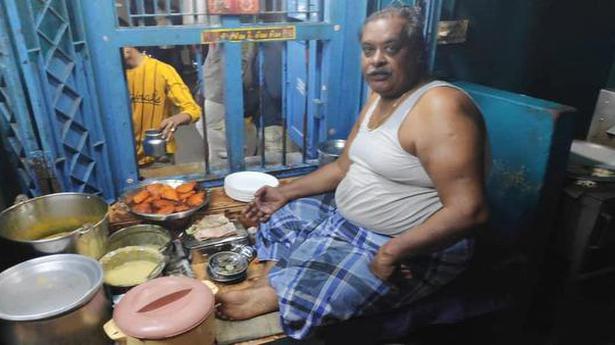 For a lot of us, a visit to Mylapore is incomplete without stopping by the iconic ‘jannal’ bajji shop. The tiny outlet, which functions out of a window on Ponnambala Vadyar Street, is a world of its own.

Peep inside and you would see nothing beyond the imposing form of Sivaramakrishnan, better known as Ramesh, seated on a cement bench, beside a basin piled high with hot bajjis. Ramesh passed away recently. While it is not known if his family will continue to run the place, just knowing that we will not be seeing his face by the window when we stop for a quick snack in Mylapore, is sad.

Vincent D Souza, editor-publisher at Mylapore Times, posted the news on his Facebook page with a photo, asking for people to share their memories associated with the place. Food writer Rakesh Raghunathan was among the first to comment. Rakesh says he remembers walking past the shop in December last year, on the way to the Kapaleeswarar temple with his son. “He called out to me and offered me a plate of bajji,” says Rakesh. “He also suggested that I offer some to my son, which I did, without second thought… He was a permanent fixture by the window,” he recalls. “It was a family joint and he usually kept it open in the evenings; but on popular demand, also opened it during the day sometimes. His chutney was legendary,” he adds.

Ramesh was quite reluctant to face the camera. It was not easy to get him to talk as well. He just meant business: you stop, tell him what you need, pay, take your plate, and eat by the road. There were no frills: the bajjis did all the talking.

Srinivas Parthasarathy from Mandaveli was a regular at the joint for 15 years. “I knew him very well; he was a senior auditor at the AG’s office,” he remembers. Ramesh was known for his no-nonsense attitude. “This was because he had to manage huge crowds at the shop, ensure that people didn’t litter…but he was actually kind. He would give away free bajjis for the needy,” remembers Srinivas.

Every day, after work at the office, Ramesh would take his position at the window, handing platefuls of crisp bajjis, vadais, and firm bondas with super-soft insides, to eager faces standing outside. “The shop was his life,” says Srinivas. “He created a brand for himself with just four dishes, and a jannal.”