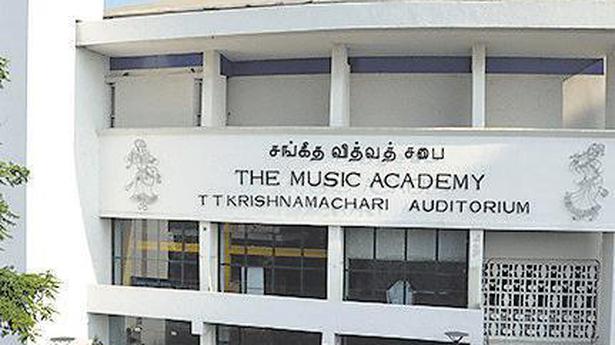 Since its launch in 1928, the December music festival of the Music Academy has remained an integral part of Chennai’s cultural milieu. It went on uninterrupted even during the Second World War and the tsunami that struck Tamil Nadu in 2004. This year, however, the COVID-19 pandemic and the resultant restrictions on public gatherings have made it impossible to conduct the festival in its physical form, prompting the Academy to take the virtual route instead.

“This is an extraordinary situation as the pandemic is raging and uncontrollable. We do not know what the regulations will be, and we cannot expose musicians and rasikas to the dangers of the disease. We cannot be expected to organise physical concerts, especially in an air-conditioned auditorium,” said N. Murali, the president of the Academy. Some of the features of a regular, full, physical season would have to be forgone, given the extraordinary circumstances.

But the Academy does not want this year’s Margazhi season to be a washout, and has been actively considering ideas to organise the festival through a digital platform. Discussions are at an advanced stage, and the final touches would be given soon. It is expected that the length of the concerts would be curtailed. “We have decided to do it imaginatively. We will record the concerts, live-stream them and upload them on digital platforms for free listening. Obviously, it (the festival) will not run for the full duration between December 15 and January 1, as has been the case all along,” said Mr. Murali, pointing out that the Academy already had a YouTube channel.

On the bright side, this means the concerts could reach a wider, global audience who thus far couldn’t attend kutcheris confined to the four walls of an auditorium. “Moreover, it will open up the possibility of organising physical and virtual concerts going forward,” he explained.

“We will use the digital platform to preserve this tradition amid the pandemic. The festival will be held for 10-12 days during the third and fourth weeks of December,” said K. Harishankar, secretary of the Federation.

Event schedules would be chalked out in due course, he added.

“The Federation will work out the details and organise support for artistes who have been financially affected during this period. All the members of the sabhas have expressed their support towards making the annual festival a success in this challenging environment, and have reaffirmed their commitment to promoting arts and culture in a sustained way,” he said.