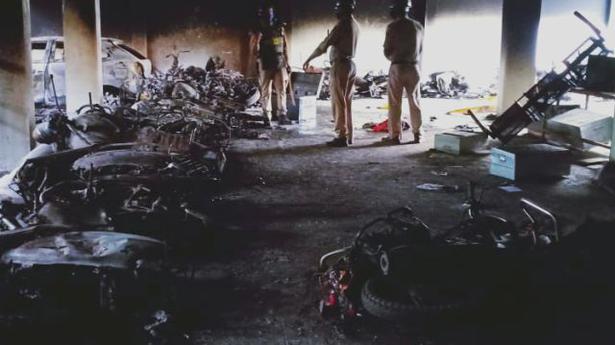 At least 110 rioters have been arrested for the violence that broke out in Kaval Byrasandra, D.J. Halli, protesting against an alleged inflammatory social media post by a relative of Congress MLA R. Akhanda Srinivasamurthy on Tuesday late night.

Naveen P, the nephew Mr. Srinivasamurthy, who allegedly put up an inflammatory post on Facebook has been arrested.

Nearly 60 policemen and at least one press person were also injured during the riots. Police have now clamped down a curfew in the area.

Tension prevailed on Tuesday night after the post went viral in the area and soon people started gathering in front of the MLA’s house protesting against the post. The MLA was not at home even as the mob pelted stones at his house and later set portions of it on fire. The police rushed to the spot and picked up Naveen even as the mob of about 1,000 demanded he be handed over to them, police officials said.

The mob accused the police of “rescuing” Naveen and soon turned against them, which spread the flash points of the violence to other parts of the area.

‘Mob would have lynched the accused’

“We have detained Naveen in connection with the post he made. The mob if they had their way would have lynched him,” said a senior police official. An angry mob of over thousand people gheraoed DJ Halli Police Station where they believed Naveen was taken to. They pelted stones on the police station and burnt down several vehicles including police vehicles parked in its compound

“Nearly 50-70 policemen were trapped inside the police station and in the vicinity battling a violent mob of over a thousand, that were pelting stones, glass bottles and burning down vehicles. It was so violent that even the striking forces that were pressed in found it hard to get into the area as they also came under attack,” said a senior police officer. A battalion of Karnataka State Reserve Police (KSRP) finally made a breakthrough and entered DJ Halli Police Station from its back entrance and secured the police station.

However, the violence spread to other areas unabated despite the police’s effforts to disperse the miscreants. Police initally used tear gas shells to quell the protests. But since the situation went out of control they resorted to firing, leaving three dead and five injured. The identities are yet to be revealed. The rioters dispersed from the streets only after the police firing.

The situation was brought under control by around 1 a.m.

“The situation was brought under control Tuesday late night. It is sad that we had to open fire,” said Bengaluru Police commissioner Kamal Pant.

As the mob went rioting, several attempts were made to calm the mob and reason with the protesters. Two Congress MLAs B Z Zameer Ahmed Khan and Rizwan Arshad rushed to the spot and tried reasoning with the rioters to no avail. Mr. Khan was also injured in the melee.

Several community religious leaders also appealed for calm, but it had little impact as most of these were circulated on WhatsApp and in the melee very few of them saw it, sources said.

A video of a group of youths from the minority community forming a human chain in front of a temple to protect it from the rioters, has gone viral. “Thankfully, the riots did not snowball into a communal riot,” a senior police officer said. “It can be compared to the violent protests and riots in December 1986 over a short story published in a local english daily, that was taken to be offensive to the Prophet Mohammed,” the officer said.

Mr. Srinivasamurthy also said he would support legal action against anyone who had defamed Prophet Mohammed, even if he was his relative and appealed for calm.