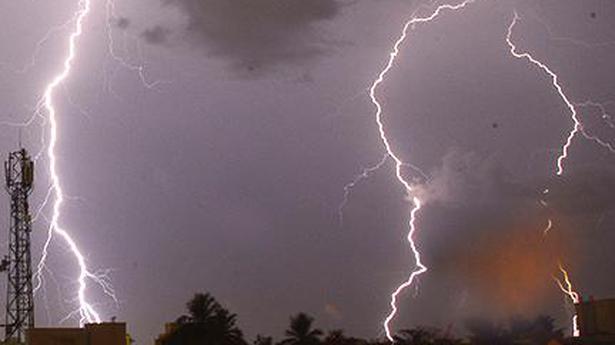 More places in the State may witness thunderstorms as the India Meteorological Department (IMD) has forecast an increase in rainfall activity from July 13. For the next two days, a few places in interior and coastal districts may experience light to moderate rainfall.

Officials said that convective activity had largely influenced light to moderate rain over the State. Many districts received rainfall during the past 24 hours ending 8.30 a.m. on Thursday. The weather station in Madurai south received 8 cm, the day’s highest amount of rainfall. Thunderstorm activity is likely to pick up from Sunday.

The sky would be generally cloudy over Chennai for the next two days. One or two places in the city have chances of thundershowers during evening or night hours. The same weather trend may continue for a few more days. S. Balachandran, Deputy Director General of Meteorology, Chennai, said the southwest monsoon trough is expected to move towards the foothills of the Himalayas after July 12. This may induce more rainfall activity in the southern peninsular region.

The weak monsoon conditions in northern parts of the country would favour development of thunderstorms in the State. The number of places that record light to moderate rains up to 4 cm would increase from July 13. This monsoon mostly brings rainfall through convective activity, he added.

The State has, so far, recorded an average of 8.1 cm rainfall, which is 13% more than its average for the season since June 1. However, some districts, including Chennai, Cuddalore and Dharmapuri, are facing a deficit in rainfall. But it may be compensated in the coming days, officials noted.

New cases come down to 190 in Kurnool