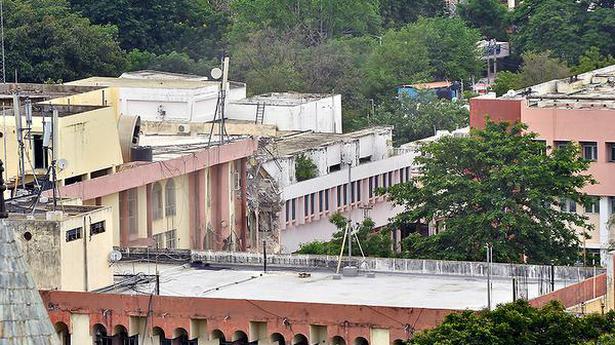 Describing the “midnight operation” to commence the demolition as highly disappointing in the present circumstances of COVID-19 pandemic, he stated that it would be remembered as a black day in the history of Telangana. He alleged that Chief Minister K. Chandrasekhar Rao had resorted to demolition of Secretariat buildings only to satisfy his superstitious beliefs.

Addressing a press conference here on Tuesday along with senior leaders of the Congress party T. Jeevan Reddy, Mohd. Ali Shabbir, D. Sridhar Babu and T. Jayaprakash Reddy, the TPCC president said the move would amount to playing with the lives of over 4 crore people of Telangana. Although courts would intervene when governments fail to act as per law, the people of Telangana are left highly disappointed by the judiciary in the matter of Secretariat buildings demolition, he observed.

He pointed out that the State government had started demolition of the Secretariat buildings in a midnight operation to prevent any intervention by the Supreme Court since the High Court verdict allowing construction of the new Secretariat buildings was challenged in the apex court and matter was expected to be heard on Wednesday. Demolition of the old structures was taken up in the midnight operation to nullify the possible stay by the Supreme Court, he felt.

Questioning the government’s justification for the need of a new Secretariat when it was unable to pay even full salaries to its staff, Mr. Uttam Kumar Reddy said many blocks in the existing Secretariat were newly constructed and in extremely good condition. He alleged that the new buildings were planned to benefit some contractors with a ₹1,000 crore deal.

He slammed the attitude of Chief Secretary Somesh Kumar, who he said, was not eligible to the top post since he belonged to Andhra Pradesh cadre, for acting as per the whims and fancies of the Chief Minister in gratitude of his appointment to the top post by sidelining about 20 other senior officers. The Chief Secretary had violated the Constitution by not attending a meeting convened by Governor Dr. Tamilisai Soundararajan.

Working president of the PCC and Malkajgiri MP A. Revanth Reddy said demolition of the existing Secretariat buildings was a “mindless act” and the environmental laws would not allow the construction of new Secretariat at the same site. The Congress party had been opposing the State government plan from the beginning, but it went ahead undermining the people’s view.

Campaign coordination committee chairperson and former MP M. Vijayashanti said the mistakes being committed by Chief Minister K. Chandrasekhar Rao are piling up every day and the day of revolt against his rule was not far away. AICC secretary and former legislator Challa Vamshichand Reddy also criticised the government’s midnight operation to commence the demolition of Secretariat buildings.

Amaravati alone is the capital of AP: Congress

Haryana: Record of empty shells must for arms licence holders in...