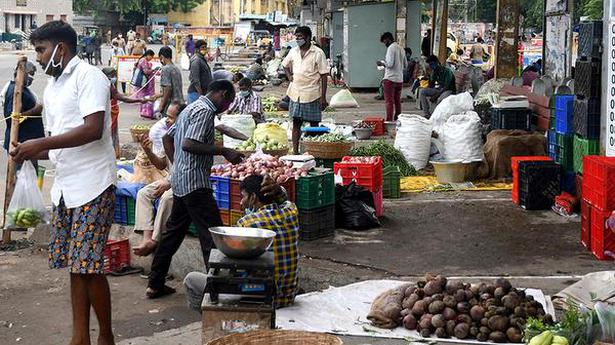 As bus services from the Broadway terminus have resumed, local vegetable trade has gone back to Malayaperumal Street

Parked on a jute mat in front of a small shop on Malayaperumal Street in Broadway, 56-six-year-old S. Gopal is luxuriating in the cool breeze from a small table fan. The fan is also keeping flies from settling on fresh tomatoes kept at the shop. A long and thick rope ensures customers stay at more than an arm’s length, and social distancing is maintained. He wears a face mask and also ensures that his tomatoes are sold only to those who wear face masks.

This was Gopal’s work station for at least three decades before he was temporarily relocated to the nearby bus terminus across NSC Bose Road in Broadway in March as part of lockdown restrictions. Along with him, a huge number of other vegetable traders, who together account for total of 250 shops, were relocated to the terminus.

“We had only two choices then: Temporarily shut down our business or relocate to the makeshift market to run it. Many shut their shops as it was difficult even to earn the maintenance costs,” says Gopal, who is also secretary, Malayaperumal Street Wholesale Vegetable Traders’ Association.

With the State government considerbaly easing lockdown restrictions and restoring many suspended services, including resumption of bus services, from September, all shops, mostly those selling vegetables, from the bus terminus in Broadway were moved to their outlets on Malayaperumal Street.

Vegetable traders say they have been witnessing significant footfall since they shifted to their old locality.

Similarly, the footfall has increased at the bus terminus, which is maintained by the Greater Chennai Corporation, due to the resumption of bus services from September 7. Many commuters from north Chennai including Parrys’ Corner, Seven Wells, North Beach, Broadway, Flower Bazaar and Royapuram board buses from the terminus to reach various other parts of Chennai and its outskirts. Commuters especially women find it convenient and safe to board buses from this terminus due to the continuous movement of people and the presence of policemen round-the-clock.