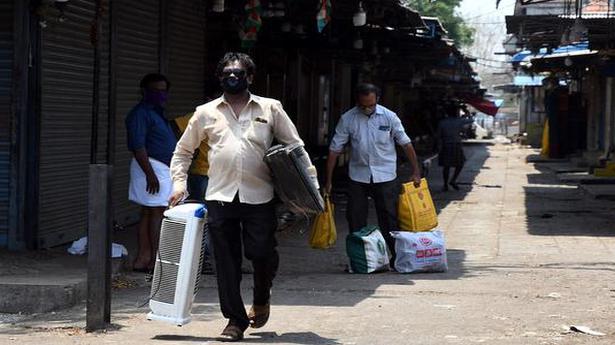 Fearing theft of articles, traders have started shifting electronic and electrical goods out of the Koyambedu wholesale market complex, which has remained closed since May 5.

There were reports of theft of weighing machines, chairs and other items from the shops particularly in the fruits’ market, alleged traders. Some traders have started clearing items such as television sets and computers from shops to prevent theft.

Members of various traders’ associations said this had come to light as some merchants had started visiting closed shops to check on them. They plan to take it up with the Market Management Committee and the police. Security in the market area must be stepped up, particularly at night, they said. Disinfection measures were being carried out in the market now.

Traders noted that similar cases were reported at Thirumazhisai temporary market. D. Rajasekaran, president, Federation of All Traders Associations of KWMC Periyar Market, said there had been reports of theft of electronic weighing machines and sometimes even sacks of vegetables stocked for next day sale.

Meanwhile, a senior police officer said the police had not received any complaints of theft so far from traders at Koyambedu. “Stealing is not possible as there are security guards in Koyambedu market. We have increased patrolling in the locality. Traders are allowed to enter the market to check their shops. There is no restriction on that. But they cannot start sales of vegetables and fruits,” he said.