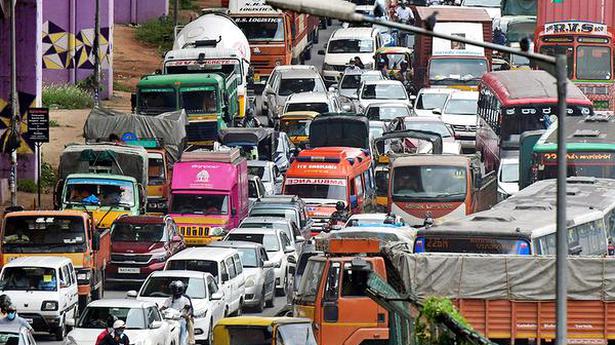 With curfew kicking in at 8 p.m. on Saturday, many who had planned to leave the city left their homes early leading to heavy traffic jams on Tumakuru Road and Mysuru Road on Saturday afternoon.

A few vehicles were even seen carrying household items, as a few families were shifting out. One of them told mediapersons that he had lost his job and was unable to pay the rent and hence had to vacate his home, forcing him to return to his village.

Karnataka State Road Transport Corporation (KSRTC) also reported a rise in passengers on their inter–district buses from Bengaluru. The corporation operates around 650-700 buses from Bengaluru to other districts. “Earlier, buses were running with 50 to 60 per occupancy. But on Saturday we witnessed full occupancy on most of the buses . Many people preferred to travel in day buses instead of evening buses,” said an official. To maintain social distancing norms, KSRTC is allowing only 30 passengers per bus.

KSRTC officials attributed the rise to the Sunday curfew and the completion of SSLC exams. People were seen waiting at various points such as Kengeri, Jalahalli Cross, Hebbal to board a bus.

However, police officials downplayed reports of an ‘exodus’ due to the fear of rising COVID-19 cases being reported from the city, as ‘exaggerated’. The city has reported over 4,500 COVID-19 cases in the past six days. Ravi D. Chennannavar, SP, Bengaluru Rural, under whose jurisdiction is the Nelamangala toll on Tumakuru Road – an exit point to the city that saw a pile up of vehicles on Saturday – said that while it was true that there was more rush than usual, it was similar to what is observed on the eve of holidays and festivals.

“Since the lockdown began from 8 p.m. across the State, people who work in the city and go to their villages during the weekend seem to have left their houses early to ensure that they reach their destination before the deadline. This traffic got piled up with the evening peak hour traffic causing some snarls,” said a senior traffic cop. An ambulance was also stuck in the traffic pile-up on Mysuru Road.

Meanwhile, Police Commissioner Bhaskar Rao tweeted asking citizens to cooperate with the authorities to enforce the lockdown. “Respected citizens, just stay at home and don’t ask for exceptions as this [Sunday lockdown] is being done in everybody’s interest. Heavens won’t fall if you postpone by a day. Please exercise self-discipline and cooperate (sic),’ he tweeted. He told The Hindu that the enforcement of the lockdown would be strict and the police would be on the streets and would seize vehicles found travelling, unless in cases of emergency.

Calling all K-Pop fans in Bengaluru