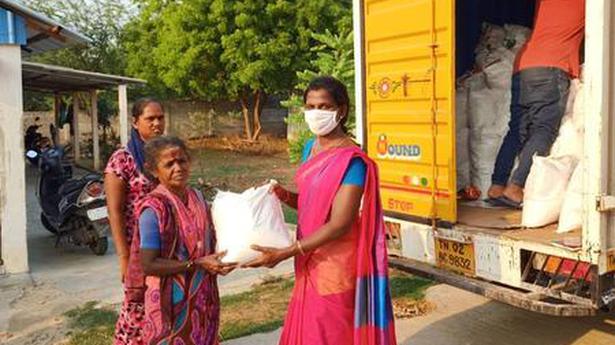 With the help of crowd-funding, members of the transgender community in Chennai have stepped in to serve the needy who have been struggling without food during the COVID-19 pandemic.

Meet M. Nila, a transwoman holding a B. Pharm degree, residing in Perumbakkam. She and other volunteers from the transgender community — Kavya, Lavanya, Afrin, Rakshika Raj and Bhavana – have been providing food to the homeless, migrant workers and those at the Tamil Nadu Slum Clearance Board (TNSCB) tenements for the past few months.

“Initially I provided food to residents at TNSCB tenements in Perumbakkam where I live. Then I realised that I should help those living in other areas too. As I was short of cash, I used crowd-funding to collect money and provided food and dry rations,” said Ms. Nila.

Seeing her work, many companies and organisations came forward to help her. “To date we have provided food to 1,000 families and dry rations to around 300. We have served areas like Kancheepuram, Chengalpattu and some parts of Chennai,” she explained.

Rakshika Raj, another transwoman, said: “We provided food to members of the Narikurava community too. We found that they were struggling a lot as their livelihood has been affected,” she said. She said that seeing the plight of the Narikurava community near Tambaram, they are planning to educate the children of the community. “We are planning to start a tuition centre and provide basic education,” she added.

However, their cash flow has now stopped and they are not able to help as many people as earlier. They aimed at raising ₹6 lakh through crowd funding, but received only ₹1.5 lakh. “Many people are also hesitant to sponsor now, as industries have started functioning and people think daily wage earners have started earning again. If we get more money, we can help more people in need,” added Ms. Rakshika.