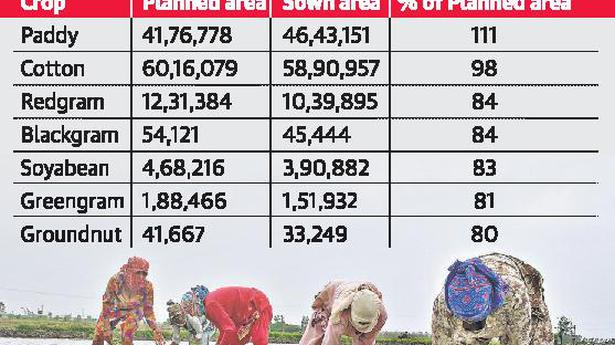 Telangana State has achieved the distinction of registering the highest increase in the cultivation of Kharif (Vaanakalam) crops in the country with about 36.6% higher extent compared to the last year, although the sowing/transplantation operations are due in about 20% of the planned extent each in four districts and about 10% each in another seven districts.

According to the statistics issued by the Ministry of Agriculture and Farmers’ Welfare for the week ending August 21, increase in the cultivation of Kharif crops in Telangana is 36.59% compared to the same period last year. Only three other States have registered over 30% increase in cultivation of crops in the first season of the 2020-21 agriculture year – Jharkhand (36.01%), Tamil Nadu (35.14%) and Karnataka (30.3%).

Only four other States have over 10% increase in the extent so far this season with 18.47% increase in Manipur, 16.23% in Bihar, 12.68% in Andhra Pradesh and 10.88% in West Bengal. As on August 21, Vaanakalam crops have been sown/transplanted in 125.81 lakh acres against 92.14 lakh acres till the corresponding day last year, Agriculture Production Commissioner B. Janardhan Reddy has said. As on Tuesday (August 25) cultivation of crops has reached 126.02 lakh acres against the planned extent of 125.45 lakh acres for the entire season.

Coupled with horticultural crops, vegetables and short-duration fruits (non-plantation) taken up in another 8.68 lakh acres, the extent covered so far is 134.70 lakh acres this season.

“With transplantation/sowing of crops remaining in about 20% of the planned extent each in four districts and up to 10% each in another seven districts, the total extent of Vaanakalam crops is expected to cross 140 lakh acres including vegetables”, a senior official in the Agriculture Department said. Cultivation of Vaanakalam crops as on Tuesday is 80% in Suryapet district, 81% in Wanaparthy and 88% each in Mulug and Peddapalli districts.

Vikarabad district tops the State in Kharif cultivation as it has covered 24% higher extent than planned area followed by 19% in Jangaon, 13% in Sangareddy, 9% in Rangareddy, 8% in Medchal-Malkajgiri, 7% in Mahabubnagar, 6% each in Nagarkurnool and Bhadradri-Kothagudem and 5% in Warangal Urban district. Cultivation has been 100% of the planned extent or little more in Kumram Bheem-Asifabad, Adilabad, Khammam and Nalgonda districts.