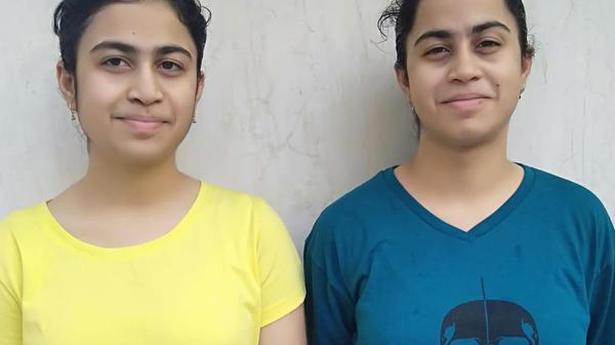 Identical twins Manasi and Manya Singh were in for a surprise on Monday when their CBSE Class 12 results were announced as both scored identical marks. Growing up, their teachers could not differentiate between them, and it seems nor could the CBSE.

Both scored 95.8% with the same marks in English, Computer Science, Physics, Chemistry and Physical Education. Having gotten used to scoring similar marks right through school, the twins said that it was a happy coincidence that they managed identical marks in the Board exam.

The twins want to pursue engineering and are waiting to appear for JEE Mains, scheduled in September.

Students of Aster Public School in Greater Noida since Class 9, the twins said they have always had heath competition between them. “There was never any pressure to do something because my sister was doing it. We just turned out to be very similar people apart from looking alike and have always encouraged each other to become better versions of ourselves,” said Manasi.

The twins said that when they were growing up, teachers would get confused between them as they were inseparable. In Class 9, a request was made to change their section. “Although many people think we were put in different sections as our teachers could not differentiate between us, the truth is that out parents wanted us to be separated as we are introverts and were not making friends with new students,” said Manasi.

The twins studied in various schools across the country as their father is in the India Air Force.

They have been living in Greater Noida for the past four years.

In Kamu Iyer’s passing, Mumbai loses one of its last modernist...