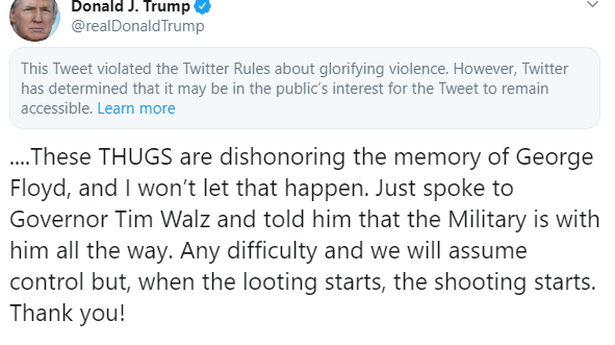 The social media platform, on Friday, covered one of the President’s tweets with a notice for violating its rules about “glorifying violence.” The tweet could however be viewed on clicking the notice; Twitter had felt it was in the public’s interest that the tweet be accessible, as per the notice.

“These THUGS are dishonoring the memory of George Floyd, and I won’t let that happen. Just spoke to Governor Tim Walz and told him that the Military is with him all the way. Any difficulty and we will assume control but, when the looting starts, the shooting starts. Thank you!” Mr Trump’s tweet said, about riots had broken out in Minneapolis, over the killing of George Floyd, an unarmed African American by a white police officer.