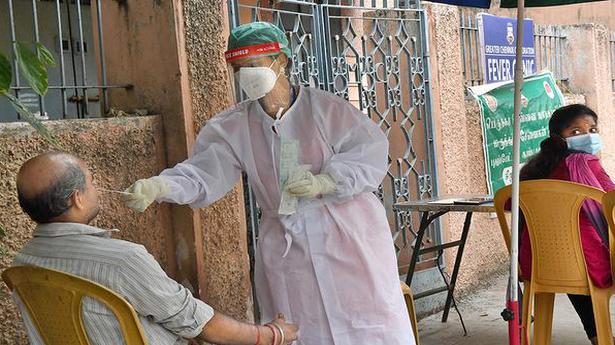 Two residents who recently recovered from COVID-19 have once again tested positive for the disease.

“Repeat cases are negligible in the city. But there have been such instances. We have identified two persons. Residents need not worry about repeat infection of COVID-19 right now. Most people have recovered from the infection. Of the 78,000 residents who tested positive for COVID-19, 60,000 have recovered. More than 250 Corporation officials have also recovered from the disease,” Mr. Prakash said.

“If the number of persons testing positive for the second time was high, we would have informed the public health officials about it,” he added. A senior official of the Greater Chennai Corporation said that a study on the cause of repeat cases was yet to be carried out in the city.

‘Data to be compiled’

“We have not yet compiled data on the [amount of] time after which repeat infection of COVID-19 has occurred in the two cases. We do not have reliable information on the cause of repeat infections right now. Doctors across the world have reported that antibodies reduce after four months of [contracting] COVID-19,” the official said.

In a bid to control the spread of the virus, the Greater Chennai Corporation has begun cleaning the premises of most of the 81 markets that remained closed for the past few weeks.

Many such markets in areas like Chintadripet, Pudupet, George Town, Triplicane, T. Nagar, Saidapet, Tondiarpet, Royapuram and Kodambakkam have been shifted to playgrounds and other open spaces. For instance, open spaces at Royapettah YMCA have been earmarked for markets in the neighbourhood.

Members of traders’ associations said they would clean the markets before getting permission to reopen them. A decision on the Koyambedu market is likely to be taken soon.

Senior officials of the Corporation warned the market authorities that they would shut down and seal premises if reports of crowding or violation of norms are seen.

Sixty playgrounds have become market areas so far. The temporary markets are expected to be shifted to the old premises in 10 days.

Similarly, the Greater Chennai Corporation has asked banks to start sending banking correspondents to disburse pensions to senior citizens at their doorstep.