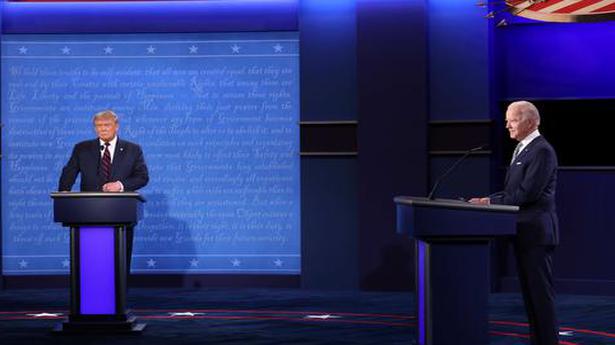 President Donald Trump and Democratic challenger Joe Biden began the first presidential debate with heated exchanges over health care, the coronavirus and the future of the Supreme Court.

Fitting for an edge in their bitter campaign, the two men frequently interrupted each other with angry interjections, with Mr. Biden eventually snapping at Mr. Trump “Will you shut up, man? That was after the President badgered him over his refusal to comment on whether he would try to expand the Supreme Court in retaliation if Mr. Trump’s high court pick, Amy Coney Barrett, was confirmed to replace the late Justice Ruth Bader Ginsburg.

“The fact is that everything he’s said so far is simply a lie,” Mr. Biden said. “I’m not here to call out his lies. Everybody knows he’s a liar”. Mr. Trump struggled to define his ideas for replacing the Affordable Care Act on health care in the debate’s early moments and defended his nomination of Ms. Barrett, declaring that “I was not elected for three years, I’m elected for four years. We won the election. Elections have consequences. We have the Senate. We have the White House and we have a phenomenal nominee, respected by all”.

Earler Mr. Trump and Mr. Biden arrived in Cleveland hoping the debate would energize their bases of support, even as they competed for the slim slice of undecided voters who could decide the election. It has been generations since two men asked to lead a nation facing such tumult, with Americans both fearful and impatient about the coronavirus pandemic that has killed more than 200,000 of their fellow citizens and cost millions of jobs.

The pandemic’s effects were in plain sight, with the candidates’ lecterns spaced far apart, all of the guests in the small crowd tested and the traditional opening handshake scrapped. The men did not shake hands and, while neither candidate wore a mask to take the stage, their families did sport face coverings.

“How you doin’, man?” Mr. Biden asked the President as they entered.

With just 35 days until the election, and early voting already underway in some states, Mr. Biden stepped onto the stage holding leads in the polls — significant in national surveys, close in some battleground states — and looking to expand his support among suburban voters, women and seniors. Surveys show the president has lost significant ground among those groups since 2016, but Mr. Biden faces his own questions encouraged by Mr. Trump’s withering attacks.

Mr. Trump had arguably his best chance to try to reframe the campaign as a choice between candidates and not a referendum over his handling of the virus that has killed more people in America than any other nation. Americans, according to polling, have soured on his leadership in the crisis, and the president has struggled to land consistent attacks on Mr. Biden.

Leaving the White House for Cleveland, Mr. Trump pumped his fist for supporters gathered on the White House lawn but did not address reporters. He spent the morning in informal debate preparations while a more formal session was set for the afternoon once he arrived in Ohio. Mr. Biden held an umbrella to ward off the Delaware rain as he boarded a new, bigger campaign plane en route to Cleveland. He, too, did not address reporters.

Though some Mr. Trump aides involved in the preparations urged the president to adopt a measured tone while selling his own accomplishments, Mr. Trump had told advisers he was preparing an all-out assault on Mr. Biden, claiming that the former senator’s 47 years in Washington have left him out of touch and that his family, namely his son Hunter, has benefited from corruption.

Mr. Biden’s performances during the primary debates were uneven, and some Democrats have been nervous as to how he would fare in an unscripted setting. But his team also viewed the night as a chance to illuminate Mr. Trump’s failings with the pandemic and economy, with the former vice president acting as a “fact checker on the floor” while bracing himself for the onslaught that was coming.

The tumult of 2020 was difficult to overstate-COVID-19 has rewritten the rules of everyday life; racial justice protests have swept into cities after several highly publicized killings of Black people by police, and the death of Supreme Court Justice Ruth Bader Ginsburg allowed Mr. Trump to nominate a conservative jurist to replace a liberal voice and perhaps reshape the high court for generations.

But the impact of the debate — and the two to follow – remained unclear. Despite the upheaval, the presidential race has seemed largely unchanged since Mr. Biden seized control of the Democratic field in March and opened a steady lead over Mr. Trump.

Both sides looked to one-up each other in the hours before the debate.

Mr. Biden released his 2019 tax returns just days after the blockbuster revelations about Mr. Trump’s long-hidden tax history, including that he paid only $750 a year in federal income taxes in 2016 and 2017 and nothing in many other years. The Mr. Bidens paid nearly $300,000 in taxes in 2019.

President Donald Trump won’t say when he will finally make his personal taxes public as he has long promised.

During the first presidential debate Tuesday, Mr. Trump was asked specifically about a report in The New York Times that revealed he paid only $750 in personal income taxes each of those years.

All Presidents except Mr. Trump have publicly released their taxes since the presidency of Richard Nixon.

Trump has said since 2016 that he would eventually release them. But when asked by moderator Chris Wallace when, he said only: You’ll get to see it. Democratic nominee Joe Biden quickly used that as a point of attack, saying Trump does take advantage of the tax code and pays less tax than a schoolteacher.

Mr. Trump shrugged off the attack, saying that all business leaders do the same unless they are stupid.

Meanwhile, trying to hammer home a claim that Mr. Biden is not up to the job of president, Mr. Trump’s campaign pushed out a number of pre-debate accusations, including that the former vice president asked for numerous breaks during the 90-minute debate and had backed out of a search meant to rule out that either man was wearing an earpiece from which he could be fed answers.

The Biden campaign denied the accusations and, in a conference call Tuesday afternoon, chided reporters for biting on a Mr. Trump gambit.

“We’re in the middle of a global pandemic,” Mr. Biden senior campaign adviser Symone Sanders said. “Is this what you all would really like to spend your time on, these false, crazy, random, ridiculous assertions by the Mr. Trump campaign?”

The President’s handling of the coronavirus was likely to dominate much of the debate. The pandemic’s effects were in plain sight, with the candidates’ lecterns spaced far apart, all of the guests in the small crowd tested and the traditional opening handshake scrapped.

The scene in Cleveland was notably understated compared to typical election years, with none of the pomp and pageantry. Instead of the usual auditorium, the debate was held in an atrium on Case Western University’s campus – one that had been temporarily converted into a COVID-19 hospital this spring – and signs were placed on two of every three three chairs reading, “Thank you for not sitting here in observance of social distancing.”

Mexico reaches water deal with US despite violent protests