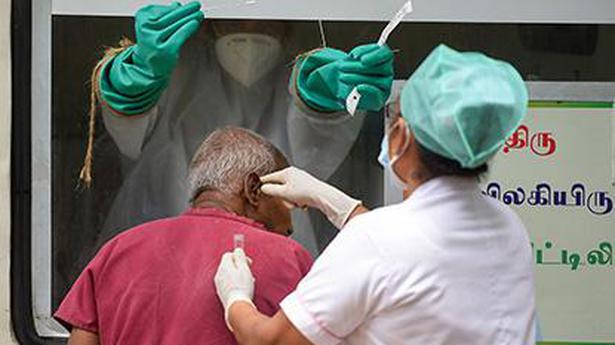 The Greater Chennai Corporation on Wednesday released details of the “doubling time” of COVID-19 cases in the city, showing that the value has increased. Officials have indicated that this signifies that infections are declining, mainly due to the intense lockdown from June 19 to July 5. However, experts say the doubling time should be interpreted not in isolation, but together with the amount of testing that has been carried out.

The graphs below show why we should be cautious about saying that COVID-19 cases in Chennai are on the decline. In fact, Chennai’s upward trend in doubling time began prior to June 19. It declined for a while during the lockdown, and subsequently went up towards the end of that period.

The lockdown was also the period when Chennai rapidly increased testing from around 5,000 tests to more than 9,000 tests per day. Consequently, cases went up while the test positivity rate (TPR) dropped marginally.

Tests performed vs. test positivity rate (May 8 to July 8)

Contrary to GCC’s indication of TPR dropping significantly, the graphs show that it has dropped only marginally and has been fluctuating based on the number of tests.The graph on tests versus positivity rate since June 23 clearly shows that whenever there was a decline in testing, TPR went up.

The data also shows that while Chennai’s doubling time may have increased to 26.9 days on July 8, the duration for the rest of Tamil Nadu is just 12.19 days – an emerging cause of concern.

Note: The doubling time is an estimate of the number of days it would take for cases to double. The rate of growth used in this calculation is for a seven-day duration, as adopted by the Indian Council of Medical Research (ICMR). The higher the doubling time, the lower the speed at which the infection spreads.

*Figures used in the calculation are from the medical bulletin. Testing data obtained from Chennai Corporation. Data as not available for Jun 20 till Jun 22.