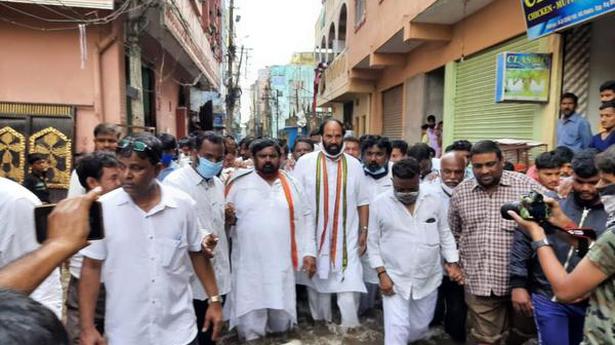 “While the entire city is flooded with unprecedented rains, and people suffering, the Chief Minister reviewed the Horticulture Department activities as if it was more important than the lives of lakhs of people suffering in the floods,” he said.

He said Mr. Rao is like Roman emperor Nero who played the fiddle while Rome was burning, and demanded that he visit flood-hit areas of Hyderabad and take immediate measures to help the affected families.

He was speaking to reporters after visiting B.S. Makhta and other flood-hit areas of Khairatabad constituency on Thursday.

He alleged that the devastation caused due to floods was not only due to unprecedented rainfall, but was also primarily due to the failure of the government in managing the civic infrastructure.

“Minister K.T. Rama Rao’s claim of government spending ₹67,000 crore on Hyderabad’s development in the last six years is ridiculous. Nothing has been done to repair, maintain or upgrade the storm water drains. The Monsoon Action Plan has just remained on paper,” he said.

The TPCC chief claimed that more than 100 people were killed due to rain-related incidents across Telangana in the last two days. However, he alleged that the State government is hiding the real figures of deaths as it did with deaths due to COVID-19.

Earlier, Mr. Reddy and other Congress leaders interacted with the affected people and also distributed relief. He assured them that that he would pressurise the government for quick relief measures. He also spoke to the concerned officials over phone and demanded relief measures on war-footing.

Police rein in BJP leaders prompting them to approach EC

5 held for theft at businessman’s house