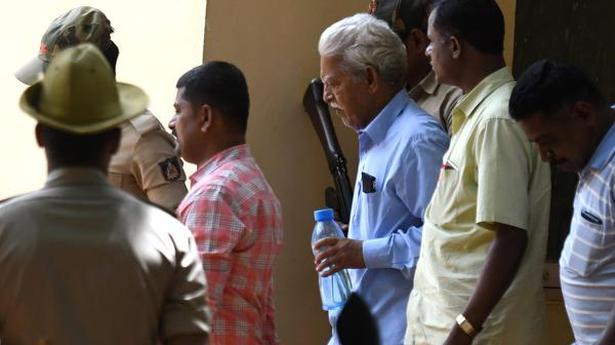 In the wake of arrested revolutionary poet Varavara Rao’s admission to JJ Hospital in Mumbai from Taloja jail amidst varied news reports, his wife P. Hemalatha has requested the Central and State governments of Maharashtra and Telangana to enable family members to know the actual status of Mr. Rao’s health condition by arranging a video conference with him immediately.

Ms. Hemalatha, 72, in a statement signed by her and released here on May 30 said that they came to know through the local Chikkadapalli Police around 8.30 p.m. on May 29 that Mr. Rao’s health condition was precarious and he was moved to JJ Hospital, Mumbai from Taloja jail. They informed family members that they had received that one-sentence information from the Pune police and did not have further details.

The letter says there are conflicting information about Mr. Rao’s health: “Then after three-four hours of gruelling anxiety and enquiries, the family learnt that he fell unconscious on Thursday evening in jail and was moved to the hospital and by Friday evening all vitals recorded normal. A health bulletin by JJ Hospital and an official brief to the media were in the public domain. On the other hand, another news appeared that he was hospitalised in Taloja jail for three days and then only had to be moved to JJ Hospital.”

Of these varying news items, the family does not know which contains how much truth and what to make of Mr. Rao’s health condition, Ms. Hemalatha said.

“In the meantime, the statement by Telangana police that they will make arrangements for the family to visit Mumbai is much more worrying,” she said.

“She is 72 and not in a position to travel to Mumbai and she is not in good health and under severe stress for the last 12-14 hours in particular and 18 months in general. Moreover, a legal attempt to get permission for the family to meet him is being undertaken in Mumbai. If the court grants permission, our family members would go to Mumbai to visit him in hospital. It is enough if the government gives permissions needed in the context of Covid-19 and we take care of our travel arrangements,” the letter reads.

Ms. Hemalatha has made a request that the Central government and the State governments of Maharashtra and Telangana let the family members know the actual status of Mr. Rao’s health condition, a video conference with him should be arranged immediately.

If the news of falling unconscious is true, comprehensive medical examination should be initiated to find out the reasons. He had pre-existing health issues like piles, prostrate enlargement, coronary artery disease, oedema, hypertension, acidity, sinus/migraine and a thorough medical examination by an examination team of doctors to know on which of these reasons or any other new reason led to the present emergency has to be initiated immediately, she said.

The letter alleges, “The Union Home Ministry should direct the National Investigation Agency which has been acting in a particularly vindictive manner against Varavara Rao and his other co-accused.”

She urged the Centre and Maharashtra and Telangana governments to release Mr. Rao immediately on bail as he had already undergone 18 months of incarceration on “fabricated charges and without any trial”.

The letter adds, “Since the world renowned revolutionary poet Varavara Rao took part in Telangana movement ever since 1969 as a worthy son of Telangana, it is the responsibility of Telangana government to take care of his health, well-being and security.”