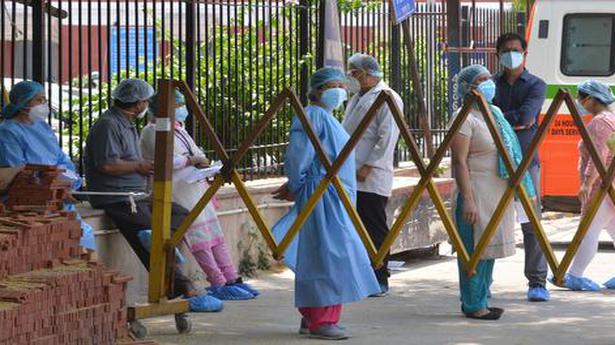 Taking note of a video clipping on social media of a man who had to run from pillar to post to get his mother hospitalised after testing positive for coronavirus, the Delhi High Court has directed the Centre and the AAP government to place before it arrangements made to deal with such patients.

Observing that the video “raises serious issues of public concern in the present day context”, a Bench of Justices Vipin Sanghi and Rajnish Bhatnagar issued several directions, including making effective the helplines for reporting coronavirus cases, assessing their adequacy to deal with the increasing call traffic and providing ambulance facility to pick up patients.

It directed the two governments to place before it the status of functional and responsive helpline numbers being operated by them. It also appointed an amicus curiae to look into the grievances raised in the video clipping.

“The amicus curiae shall also call the helpline numbers and report with regard to their effectiveness in providing help to the callers,” the Bench said.

The court, which took suo motu cognisance of the clipping, also directed the Delhi government and the Centre to respond to the grievances narrated by the man — Dharmendra Bhardwaj — who has alleged in the video that “tall claims” of both the governments regarding arrangements for COVID-19 patients “are far from true on the ground”.

He said his mother was admitted in a private hospital on May 19 and she tested positive for COVID-19 on May 21.

Thereafter, the private hospital asked him to arrange for a ventilator and bed in some other hospital, he claimed, adding that he went to several hospitals, but to no avail.

Even the helpline numbers publicised by the Delhi government and the Centre were non-responsive, Bhardwaj has alleged in the video which has been taken on record by the high court.

Taking note of his grievances, the Bench observed that a person, who or whose family or friend is found COVID-19 positive, should be able to call the helplines to not only report such occurrence, but to also seek guidance and assistance with regard to the hospitals to which such patient may be taken — if hospitalisation is necessary keeping in view of the condition of the patient.

“The helplines should render meaningful and effective help to the callers. If the experience of Dharmendra Bhardwaj is anything to go by, it appears, that this aspect has not been adequately addressed by the respondents (Centre and Delhi government),” the court said.

It directed them to “assess the adequacy of the helpline capacity and state whether the same is sufficient to deal with the present call traffic and the traffic expected in the foreseeable future, keeping in view the continuous rise in the number of cases being reported each day”.

The Bench was also of the view that “the helpline numbers of the GNCTD (Govt of NCT of Delhi) should also provide guidance and information to the caller as to which hospital has beds available for treatment of serious COVID-19 patients — both in Government and Private Hospitals, particularly in the proximity of the caller patient’s location.

“The capacity created to deal with calls made on the helpline numbers; the nature of assistance rendered, and the log maintained for the same, if any, should also be placed before the Court,” it said.

The Bench further directed the Delhi government to consider providing ambulance facility for pickup of COVID-19 serious patients for hospitalisation, once a caller reports a serious case which appears to require hospitalisation looking to the condition reported.

During the hearing, Delhi government standing counsel (criminal) Rahul Mehra told the Bench that there were around 10 helpline numbers and admitted that they were “found not to be functioning efficiently and instructions have been issued to set the system in order”.

He told the court that the same would be done within the next couple of days.

Mehra also informed the Bench that a mobile application is under development to give live updates of the hospital beds available in Delhi government hospitals and private hospitals, and other related information.

He told the court that the mobile application would be launched in the next couple of days.

“We direct the Central Government, as well as the Government of National Capital Territory of Delhi, to file their status reports on all the aspects mentioned in the said video recording and those taken note of by us, before the next date of hearing,” the court said.

It directed the registry to place the matter on June 3 before the Bench headed by the Chief Justice as it deals with PILs.

Ankit Bawne​ safe and sound with ‘Jolly’ and friends | Cricket...

Weeks ahead of retirement, Mumbai railway cop dies of Covid-19 |...