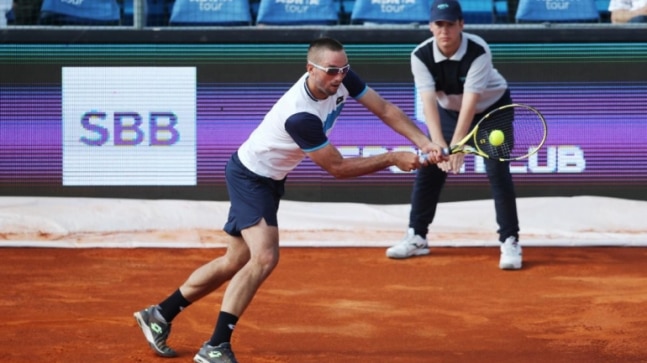 Serbian tennis player Viktor Troicki has joined Bulgaria’s Grigor Dimitrov and Croatia’s Borna Coric to join the list of players who have tested positive for Covid-19 after participating in the Novak Djokovic-organised Adria Tour exhibition event.

Viktor Troicki played in the first leg staged at Djokovic’s tennis complex in central Belgrade from 13-14 June, before Dimitrov and Coric tested positive at the second leg in Zadar held from 20-21 June.

Earlier, Borna Coric took to social media on Monday to reveal he tested positive for Covid-19 a day after Grigor Dimitrov said he has contracted the novel coronavirus.

“Hi everyone, I wanted to inform you all that I tested positive for Covid-19. I want to make sure anyone who has been in contact with me during the last few days gets tested! I am really sorry for any harm I might have caused. I am feeling well and don’t have any symptoms. Please stay safe and healthy. Lot of love to all!” Borna Coric said.

Notably, Borna Coric had faced Grigor Dimitrov over the weekend in the charity tennis tournament — Adria Tour in Zadar Croatia.

Novak Djokovic has been slammed by the tennis players and fans across the world for organising the tournament which has now raised unprecedented question over the restart of ATP and WTA events.

Novak Djokovic gave clarifications after facing endless criticisms and said that the situation was very different in Serbia in comparison to the rest of the world. He added that the event was held according to the rule laid out by the governement.

“I know there have been some criticisms as well especially coming from the West: ‘why do we have a crowd? Why not have social distancing?” Djokovic had said.

“But it’s hard to explain to people that the situation is really, really different maybe in America or the UK than it is in Serbia or surrounding countries, and obviously from the day one of the organisation of the Adria Tour, [we have been] following the rules and the measures that have been regulated by the government institution and the public health institution.”

“Boneheaded decision to go ahead with the ‘exhibition’ speedy recovery fellas, but that’s what happens when you disregard all protocols. This IS NOT A JOKE,” Kyrgios wrote on social media.

Briton Dan Evans, who had earlier criticised Novak Djokovic over his concerns’s regarding Covid-19 protocols at upcoming US Open, also slammed Djokovic and asserted that the Serbian should feel responsible for all the chaos.

“I don’t think he should be having a players’ party and dancing all over each other, Two very good tennis players have tested positive. He should feel some responsibility in his event and how it’s transpired, really,” Evan said.

CSK has variety in spin, will have edge in UAE conditions: Brett Lee | Cricket News – Times of India

CSK has variety in spin, will have edge in UAE conditions:...