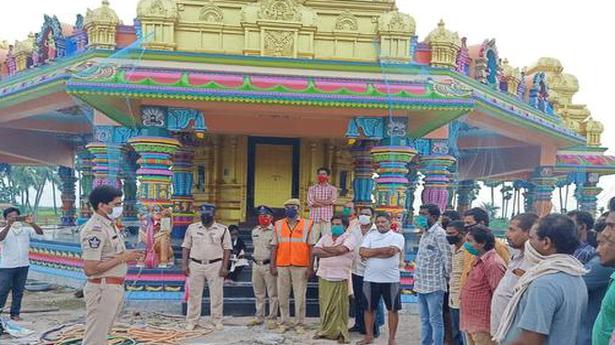 The Krishna district police have come up with a unique idea of setting up Village Defence Squads (Grama Rakshaka Dalams) to step up vigil in villages and provide security to places of worship.

As many as 503 Village Defence Squads have been formed to control crime, keep a tab on anti-social elements and protect the shrines in the district. The dalam members will move with patrolling police and help them in maintaining law and order.

“In the wake of attacks on shrines in the State, thefts and damaging of idols in the last few days, Village Defence Squads have been entrusted with the task of maintaining vigil at places of worship. The squad members have been asked to focus on protecting shrines and their properties,” said Superintendent of Police (SP) M. Ravindranath Babu.

Deputy Superintendents of Police (DSPs), Circle Inspectors (CIs) and SIs will visit the shrines in villages, conduct meetings with village and community heads and discuss about security at the places of worship.

Grama Rakshaka Dalams will hold meetings with the temple managements, Trust Board committee members, Panchayat elders and appraise the situation in the villages to the beat and Station House Officers. They will ensure that there is electrification at the shrines and CCTVs are installed, Nuvid DSP B. Srinivasulu said.

“With a view to involve people in policing, Village Defence Squads have been constituted. Each dalam will have 10 members, and a 5,000 strong force is involved in protecting places of worship,” Mr. Ravindranath Babu said.

“Besides, the squads will track the movements of suspects, history- and rowdy-sheeters and criminals involved in different crimes earlier and alert the police from time to time, which will help police prevent crimes,” Jaggaiahpet CI P. Chandrashekar said.

“We are holding meetings with the village and community heads and appealing to the villagers to respect the sentiments of all sections in the society, and not to insult any person or community,” said Ramakrishna, a dalam member.

“The dalam members observed the juveniles moving suspiciously during the night and alerted the police, who took them into custody and recovered the stolen hundi on the same day,” the SP said, praising the squad for helping the police detect the case.

In a similar case, miscreants damaged a Nandeeswara idol at Sri Kasi Visweswara Swamy Devalayam, at Makkapeta village under Vatsavayi police station limits a few days ago. Police picked up 35 suspects, including some persons who had a previous history, with the help of Grama Rakshana Dalam. The case is under investigation, the SP said.