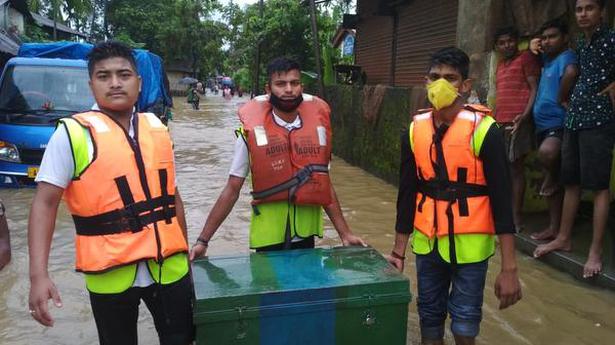 A ‘resistant army’ of volunteers has been helping an eastern Assam district combat a pandemic and two concurrent disasters — flood and a blazing blowout natural gas well untamed for almost two months.

Tinsukia Superintendent of Police Shiladitya Chetia had to take some of his men off COVID-19 duty for crowd control at Baghjan where an Oil India Limited well burst into flames. Protests over the accident and resultant ecological damage also warranted protection of other sites of the oil major.

He looked no further than Protirodhi Bondhu, meaning Resistant Friends, a community-based volunteer force the Assam State Disaster Management Authority (ASDMA) had formed soon after the nationwide lockdown began. “They have been a force multiplier, helping the administration and the police in controlling crowds, enforcing COVID-19 protocols, rescuing flood-affected people and providing other non-medical services,” Mr. Chetia told The Hindu.

The volunteers also stepped in when 35 police personnel and homeguards tested COVID-19 positive. “We have 245 volunteers, 30 of whom are girls, providing an array of services from checking people’s temperature and adherence to COVID-19 protocols at an entry point for buses and trucks to regulating the movement of people at Tinsukia’s Siding wholesale market and banks,” said ASDMA District Project Officer Ruby Gogoi.

The authorities had doubts about the ability, attitude and sincerity of the volunteers when applications were sought in April. Some 16,000 registered but 14,000 were selected with 5,500 presently engaged in different activities. “These young people exceeded our expectations,” Ms. Gogoi said.

On July 15, five volunteers cremated Pradip Kumar Sharma, a 75-year-old doctor who died of COVID-19, after the municipal workers refused.