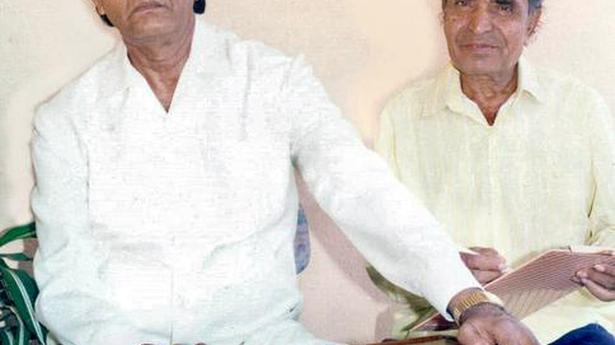 The score of Rajan-Nagendra in the film music world is noteworthy; the brothers gave hits after hits for close to three decades

Acclaimed music composer Rajan, of Rajan-Nagendra fame, passed away at his residence in Bengaluru on Sunday night. Some of the best-remembered Kannada film songs of the 60s, 70s, and 80s were composed by the brothers.

“My father was healthy and took music classes online even the day before his death,” said the 85-year-old composer’s son R. Ananth Kumar. Rajan’s brother Nagendra had passed away in 2000, ending possibly one of the longest music collaborations in the film industry.

Hailing from Mysuru, the brothers were surrounded by music, as their father Rajappa worked as a musician for silent era films. The duo went to Chennai (then Madras), to learn music. While Rajan trained as a violinist, Nagendra learnt the harmonium. They were barely out of their teens when they debuted as music directors for the film Soubhagya Lakshmi in 1952.

“The then reigning singer Ghantasala reportedly refused to sing as the music was composed by children. But he eventually sang the songs and was all praise for the brothers after he listened to the compositions,” recalled senior film journalist N.S. Sridhar Murthy. The duo never looked back and went on to score music for 380 films – 212 Kannada, 45 Telugu, and the rest in Tamil, Malayalam, Tulu, and one Sinhala film.

Rajan-Nagendra peaked in their popularity during the 1970s and 1980s. They composed music for most of Dr. Rajkumar, Vishnuvardhan, Anant Nag’s films and those of other stars of that era, including Eradu Kanasu, Bayalu Daari, Gandhada Gudi, Sri Srinivasa Kalyana, Avala Hejje, and Gaali Maatu. Endendu Ninnanu Maretu, Aakashave Beelali Mele, Hosa Baalige Nee Jotheyade, Mamaravello…Kogileyallo, Naliva Gulabi Hoove, are some of the superhits of Rajan-Nagendra. They are also credited with bringing Kishore Kumar to sing a Kannada song Adu adu aata Adu for Kulla Agent 000, produced by Dwarakish. They were particularly known for their duets, many rendered by S.P. Balasubrahmanyam and S. Janaki.

S.K. Bhagavan, veteran filmmaker, said that works of Rajan-Nagendra were marked by melody and elaborate string sections. He recalled how they divided tasks between each other and worked together excellently. “They quarrelled over tunes and background scores, but never allowed it to affect their relationship,” Mr. Bhagavan said.

“They used to ask for the film’s story, discuss song situations and compose music with the larger picture in mind. They used to give three tunes for every situation. Rarely did we have to ask for another,” he recalled.

Mr. Bhagavan remembers Rajan as a man of few words with an almost inaudible voice. Rajan was very particular about the tune, and would not allow lyricists to write out of tune and he never changed his tune,” Mr. Bhagavan recalled. Known for their lilting duets, they were adamant that only S.P. Balasubrahmanyam and S. Janaki sing them, he said.

The brothers had slowly started retreating from the field as Hamsalekha and other new-age music composers entered the scene in the 90s. Nagendra’s death in 2000 ended their run decisively. In later years, Rajan composed music for devotional songs with his son R. Ananth Kumar, as Rajan-Ananth.

Rajan started a music school Sapta Swaranjali in the city and continued to teach till the last few days of his life.