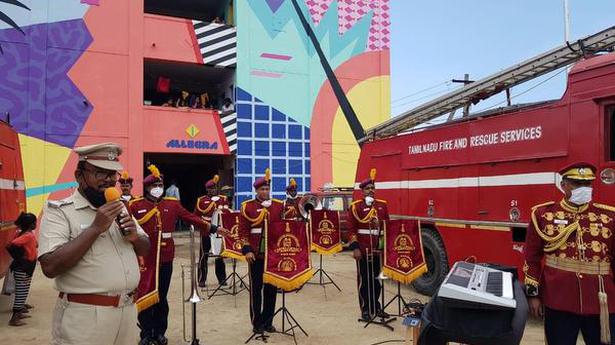 Dousing fires, rescuing animals and human beings during disasters, disinfecting public spaces to the prevent spread COVID-19 — these are some of the many tasks the Tamil Nadu Fire and Rescue Services (TNFRS) has taken up during the pandemic. However, more recently the fire fighters have donned a new avatar — as musicians for a cause. Their music band has now been going around slums and congested localities in Chennai, creating awareness about the pandemic.

On Tuesday morning, it was the turn of residents of Tamil Nadu Slum Clearance Board (TNSCB) tenements, Kannagi Nagar to listen to some music and educate themselves about safety measures to prevent the spread of the virus. The band, comprising six members dressed in maroon ceremonial uniforms, arrived in the locality with musical instruments including drums, a keyboard, clarinet and trombone.

Holding a mike, K. Balaji, a fireman, started singing — Kai Kulukadhe, Kai Eduthu Kumbidu, Otti Nikadhe Nalladhilla Nambidu (Don’t shake hands, welcome with folded hands, dont stand too close to others, it is not good) — a song penned by the band master D, Manoharan, who was playing the keyboard. The remaining members played the drums and the other instruments.

“We have played for parades and other government functions. This is the first time we are doing an awareness programme, says Mr. Manoharan, who has been in the TNFRS for 25 years and in the band for 18 years.

From April this year, members of the band have been going around the city and creating awareness. “We have gone to Todd Hunter Nagar, J. J. Nagar, Mint and other parts of the city. We play three COVID-19 awareness songs and then our officers and Greater Chennai Corporation officials speak to residents about precautionary measures. We also distribute masks among the public,” says Syed Mohammed Shah, District Fire Officer, South, the band’s coordinator.

When the band starts playing, people stand on their balconies and listen. “It draws the attention of the public, especially children, easily. We are doing this based on the directions of our director C. Sylendra Babu. The band is accompanied by fire tenders,” explains Priya Ravichandran, Joint Director, Northern Region, Chennai.

K. M. Mugilan, a resident of Kannagi Nagar, said that it was a pleasant experience. “Our locality has seen street plays, gaana songs and other forms of awareness programmes. But when the fire fighting vehicle comes, children are happy, and the songs are also good,” he says.

The members of the band are from different fire stations and get back to their units during emergencies. “Creating awareness is also a form of service to the society,” adds Mr. Manoharan.

Olympics around the corner, would be lovely to have athletes train...