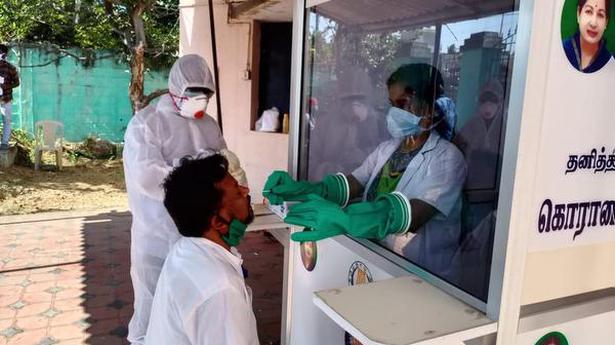 One, residents of Mogappair seek the establishment of a COVID-19 testing facility at the Urban Primary Health Centre (UPHC) centre run by Greater Chennai Corporation (GCC) near Veeramamunivar Park. For COVID-19 testing, residents of Mogappair East, Mogappair West, Padi Kuppam and Collector Nagar head to a special government-run health unit near Ambattur taluk office, with some of them having to travel eight kilometres.

Two, on the outskirts of Chennai, in a couple of areas that come under the Chengalpattu district administration, COVID-19 testing is carried out at two Upragded-Primary Health Centres (UPHC), one at Poondi Bazaar in Tambaram; and the other at Medavakkam. At the Medavakkam UPHC, on an average, around 80 residents are said to be undergoing testing every day. The samples are sent to the Kings Institute in Guindy, with residents made aware of the results in two days.

The Medavakkam example may give fresh impetus to the question, one that is already being asked by residents from certain parts of Chennai, besides Mogappair: “Why not COVID-19 testing at select UPHCs within GCC limits?

Residents from the extended areas of Corporation, including Ambattur, Manali and Porur seem to be particularly batting for the idea.

Residents underline lack of readily available transport — except where residents have their own — as a challenge in reaching the testing centres.

Before reaching the testing centre in Ambattur, residents say, they have to get past many police checkpoints between Mogappair and Ambattur, where they are stopped and quizzed.

These residents also point out that street-wise testing carried out in the locality a few weeks ago was far from effective as some streets were bypassed.

At present, Corporation enumerators go from door to door and check on residents for COVID-19 symptoms. In addition, fever camps are also organised in every zone, covering the localities on designated days. One such camp was recently held at the park in Thiruvengada Nagar in Ambattur Old Town (OT) by Zone — 7 of GCC, and this is what S. Suresh, secretary, Thiruvengada Nagar Residents Welfare Association, has to say about it: “Our residents association is not in favour of such mass testing at public places like parks as it leads to congregation of residents, where social distancing norms can be flouted. Door-to-door screening and testing on a regular basis will be an effective way to ensure safety of residents.”

GCC has 140 Urban Primary Health Centres in its 15 zones covering all the 200 wards. Corporation officials point out that the option of not having COVID-19 testing at UPHCs is largely governed by two considerations — one, having a COVID-19 testing facility at UPHCs may deter many residents from using these centres for the regular health services they offer; and two, lack of adequate space at most UPHCs for having a special area for COVID-19 testing.

At Medavakkam, outside GCC limits and in Chengalpattu district, the UPHC is spacious, and that is said to be reason why COVID-19 testing is allowed.

“We have a separate testing area on the premises for the purpose of testing for COVID-19. Besides, the availability of cold storage facilities to keep samples is a factor. The Medavakkam UPHC has such facilities,” says Dr. Rajesh, Medical Officer, UPHC, Medavakkam.