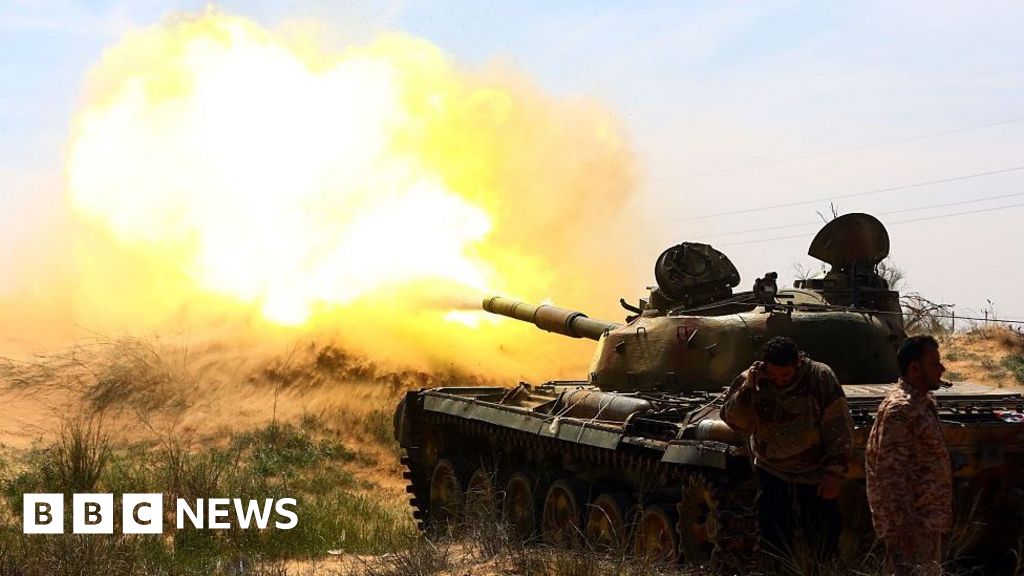 Imagine the house next door is on fire and there is no fire brigade to call on to avert an imminent disaster about to engulf you and your family.

That is how Egypt has viewed Libya since the brutal end of former Libyan leader Colonel Muammar Gaddafi and his regime in 2011.

Libya has no properly functioning state institutions, no unified army or security forces to speak of, and, crucially, no border guards on its side of their porous 1,100km (685-mile) long desert border. Plus the country is awash with weapons.

The fire began to spill over when Libyans failed to agree on a path forward, militias of all kinds proliferated, jihadists resurfaced to pursue their dream of creating an Islamic state in Libya and beyond.

Egypt – whose military overthrew Islamist President Mohammed Morsi in 2013, and jailed him and other leaders of the Muslim Brotherhood – became a prime target:

Post-Gaddafi Libya was quickly caught up in the chasm that has polarised and paralysed politics in nearly the whole of the Middle East and North Africa.

It is the struggle between the advocates of political Islam, foremost among which is the transnational Muslim Brotherhood and its many offshoots, and secular or quasi-secular forces and old-fashioned nationalists.

A UN-brokered deal that set up a provisional government in Tripoli failed to disarm the militias or achieve the national reconciliation it was created for.

As Libya fractured between an Islamist-dominated west and anti-Islamist east – it was only natural for Egypt, which had declared the Muslim Brotherhood a terrorist organisation, to throw its weight behind the man who had declared war on the Islamists in Libya, Gen Khalifa Haftar.

He had fought them and cleared Benghazi and other major urban centres in the east and south of Islamist militants.

For the past six years, Egypt’s main goal had been to contain the fire within Libyan borders by giving covert support for Gen Haftar.

But things took a dramatic turn late last year when Turkey – the biggest supporter of political Islam in the region – decided to throw its weight behind the beleaguered UN-brokered government.

It offered technical and military support which eventually helped it to stop the advance of Gen Haftar’s troops to capture Tripoli.

Encouraged by its gains on the battlefield, the Turkish-backed Tripoli administration vowed to march on to capture the rest of the country and defeat Gen Haftar totally.

Alarmed by reports of Turkey transferring thousands of battle-hardened Syrian mercenaries and jihadists to Tripoli and setting up Turkish bases in western Libya, Cairo felt it had no other option but to respond.

In June, after inspecting rows of tanks and rocket launchers and watching an air force display with his top military brass in a base near the border with Libya, Egypt’s President Abdul Fattah al-Sisi made a dramatic announcement.

Striking a pan-Arab chord, he said that given the historical ties between the peoples of Libya and Egypt, Cairo had a legitimate right to intervene to defend the national interests of the two nations against “foreign schemes”.

There was no explicit reference to Turkey, but everyone understood what he was referring to. A Libyan delegation of tribal leaders in the auditorium cheered him on.

President Sisi had drawn a line in the sand – between Sirte on the Mediterranean and the area around the Jufra airbase in central Libya – as Egypt’s “red line”.

Any attempt to cross that by the militias loyal to Tripoli would be a direct threat to national security, he said.

A few days later, Egypt’s parliament rubber-stamped a mandate for the president, who is also the supreme commander of the armed forces, to deploy troops as he saw fit.

The Tripoli-based administration reacted angrily to President Sisis’s threat of military intervention, describing it as a “declaration of war”.

Is this a serious threat or just sabre rattling?

Observers outside Egypt were quick to raise questions about the Egyptian army and its capabilities.

But at home public discussion of the military and its performance is strictly forbidden.

Local media applauded the president and hailed the Egyptian army as one of the strongest in the world, even comparing it to the Turkish military, with the usual dose of vitriol levelled against President Recep Tayyip Erdogan and his Libyan “stooges” in Tripoli.

However, a few moderate voices urged caution out of fear that Egypt might get sucked into the Libyan quagmire.

It is reasonable to assume that the Egyptian military is wary of intervention, not least because of what the long supply lines which would be needed between Egypt and central Libya – the scene of any eventual confrontation

There is also concern that what might start as a surgical intervention could quickly develop into a military morass in Libya’s unwinnable civil war.

The observers also noted that the Egyptian military has not had any battlefield experience since 1973 and its last war against Israel along the Suez Canal and the Sinai desert.

Its most recent experience of fighting against Islamist militants in northern Sinai is not particularly impressive.

A war in the Libyan desert between a conventional army and a plethora of militias may prove even more difficult.

Yet having made the announcement and drawn its line in the sand, Egypt finds itself with an unenviable dilemma: