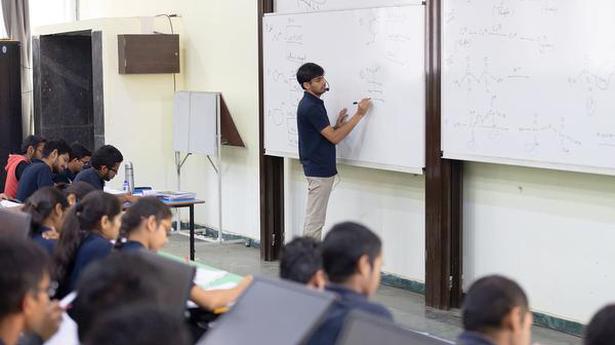 Starting in 2007 with a tie-up with seven Jawahar Navodaya Vidyalayas, Dakshana Foundation has come a long way with 374 students cracking this year’s JEE

Their spirits undeterred by the COVID-19 pandemic, scholars of Dakshana Foundation, which helps bright but economically disadvantaged students from India’s rural hinterland clear some of the country’s toughest entrance exams, have posted their best result yet in this year’s Joint Entrance Exam to engineering colleges.

As many as 374 of the 486 Dakshana scholars who sat for them, cleared the tough test and four have secured category (SC/ST) ranks among top 50 students from the backward communities, according to the Foundation authorities.

“Of the 374, more than 280 are expected to be absorbed by the IITs based on the closing ranks accepted by the IITs in 2019,” said Col. (retd.) Ram Kumar Sharma, chief executive officer (CEO).

To select the best and brightest students from the country’s rural and semi-urban areas, the Foundation, in 2007, began by tying-up with seven Jawahar Navodaya Vidyalayas (JNV) across the country, including in Rajasthan and Kerala. At Dakshana, students are coached free of cost over a two-year period to crack the IIT and NEET exams.

This year, Dakshana’s topper, Gopal Agrawal, who secured an All-India rank (AIR) of 523, hails from a humble family in Uttar Pradesh’s Muzaffarnagar district.

Gopal’s parents have barely studied up to Class X and run a small shop in the village. His father’s monthly income is less than ₹10,000.

“Cracking the IIT has been by single-minded goal since my school days when my teachers urged me to pursue engineering. When I entered the JNV, I understood that engineers are the future of India. Then I heard about the Dakshana Scholarship and made entering that my first goal and IIT my second,” says Gopal, whose boyish smile belies a steely determination.

In 2014, the Foundation established its centre in Pune — its eighth — in a sprawling, 104-acre pastoral idyll flanked by hillocks in Kadus village in Pune’s Khed taluk. Of the 486 scholars, 127 belong to Dakshana’s one-year scholarship program held at the Pune campus, where they were provided free coaching, food and accommodation, to prepare for JEE 2020.

The remaining 359 scholars were part of a two-year scholarship program run jointly with the Navodaya Vidyalaya Samiti exclusively for JNV students and were prepared at the JNV Bangalore Urban and the JNV Rangareddy in Hyderabad.

According to Col. Sharma, Dakshana’s true success lay in bringing the light of education to thousands of families in the country’s rural hinterland, thereby unfettering them from the shackles of poverty.

“Our young scholars need to study in a suitable environ. Dakshana, with it’s gurukul-like atmosphere of the Pune campus, is providing them with the wherewithal and academic support necessary to crack these difficult exams,” he said.

Lauding the determination of the students, Mohnish Pabrai, founder and chairman, said, “Dakshana’s model of alleviating poverty and unleashing the tremendous untapped talent of rural India has been successful beyond our wildest dreams. However, the best is yet to come as we are just getting started.”

The foundation has signed a Memorandum of Understanding with Ministry of Education for screening and selecting the most promising JNV students. It also has a partnership with 19 State governments.