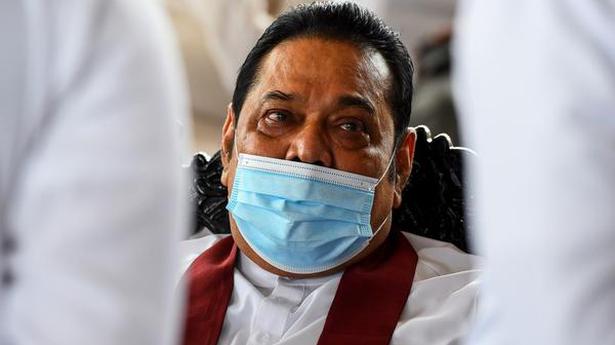 Sri Lanka’s request to India for a postponement of its debt repayment amidst the current economic crisis is “under consideration”, say officials, though no decision has been taken, more than four months after the request was made personally by Sri Lankan Prime Minister Mahinda Rajapaksa to Prime Minister Narendra Modi.

On Saturday, Mr. Rajapaksa “renewed calls for international monetary organisations to provide debt relief for developing countries” during an interaction with United Nations officials, the Prime Minister’s office said, repeating earlier appeals to all its debt partners, including India.

According to officials in Delhi and Colombo, the two sides have been discussing holding the loan repayment on the total $960 million that Sri Lanka owes India, as well as two separate Sri Lankan requests for a currency swap facility.

Ministry of External Affairs officials say they have now proposed a virtual meeting between Delhi and Colombo on the issue, to take talks further, but did not explain why the request has not been cleared thus far.

“The Sri Lankan side hasn’t yet responded on when to do the talks,” an Indian official told The Hindu.

Last week, President Gothabaya Rajapaksa told a group of European Union ambassadors that the country needs “new investments instead of further debt” and asked for a deferment on loans. In March and April as the coronavirus pandemic spread, he had called on international donor agencies to do the same.

Sri Lanka’s foreign reserves, already in peril due to economic troubles and last year’s Easter Sunday terror attacks are being further drained after the coronavirus pandemic, as its main earners — exports (tea and garments), labour remittances and tourism sectors — are all badly hit.

Sri Lanka is scheduled to repay $2.9 billion of its total external debt this year and has so far made three requests to India — a debt moratorium and two separate requests for a currency swap facility.

With bleak prospects elsewhere, Sri Lanka’s government may once again have to turn to China for help, as it did in 2014, which could raise red flags in New Delhi. After a conversation between Chinese President Xi Jinping and President Rajapaksa on May 13, Beijing has already approved an additional $500 million loan from its development bank to help with countering the impact of the pandemic.

When asked about talks on the moratorium, Chinese Embassy officials in Colombo confirmed that the two countries are working together on the financial cooperation “via different channels and mechanisms”.

“More practical progress will be drawn in coming weeks,” spokesperson at the Chinese Embassy Luo Chong told The Hindu.

Even prior to the coronavirus pandemic, Prime Minister Rajapaksa had asked India for a debt deferment during a visit to Delhi in February, as he had confirmed in an interview to The Hindu. In April, the Central Bank of Sri Lanka sought a $400 million currency swap with the RBI under the SAARC facility and again in May, President Gotabaya Rajapaksa sought a “special” $1.1 billion currency swap facility from Prime Minister Narendra Modi, who had called him to discuss the responses to the pandemic and bilateral cooperation.

The situation could get more difficult for Colombo, as Japan’s International Cooperation Agency (JICA) has put on hold funding for a proposed light rail transit system, local media reported, because of concerns over the island nation’s rising debt. Sri Lanka’s total foreign debt is approximately $55 billion, which accounts for nearly 80% of its GDP, according to last year’s official figures. Of that, China and the Asian Development bank each hold about 14%, Japan accounts for 12%, the World Bank holds 11%, while India holds about 2%.

Other countries in the region are also now seeking debt repayments. On Friday, Pakistan Prime Minister Imran Khan spoke to President Rajapaksa about joining a ‘Global Initiative on Debt Relief” to mitigate the economic impact of the pandemic, a press release from the Pakistani High Commission in Colombo said.

In the Maldives, President Solih’s government is talking to all its bilateral partners and international agencies. “We want to discuss options as the entire world tries to cope with the economic fallout of this pandemic. We would also be seeking help from India, one of our closest friends,” Presidential spokesperson Ibrahim Hood told The Hindu.

According to government sources, Maldives has very “small loans” from India, which prefers a more project-driven, development aid programme. In comparison the Maldives owes China a sum of nearly $1.5 billion, including $600 million from government-to-government, which could necessitate a shift from the Solih government’s earlier tough stand on what it called the Chinese “debt trap” due to the Belt and Road Initiative projects. Reports suggest that China has now agreed to a partial repayment, to reduce the dues this year from $100 million to $75 million, a development New Delhi will watch closely.

Animals ‘dying of hunger and thirst’ in Pantanal fires

Indian among six indicted in Amazon bribery case in U.S.