Home Cities Chennai With no transport or money, migrant workers walk 20 km to board... 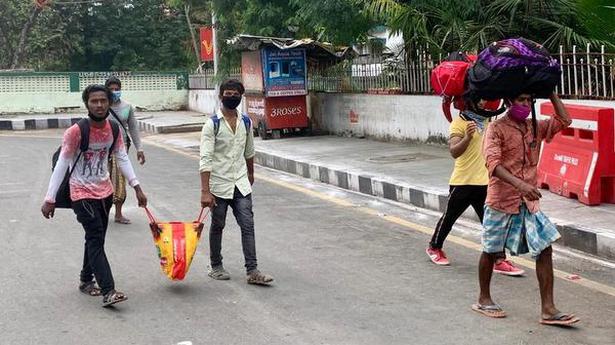 At 5 a.m. on Sunday, seven men from Kumananchavadi, packed their bags and began walking from their camp. Seven hours later, drained and starving, they reached Chennai airport to board a flight to Kolkata. From there, they have to travel for a day by bus to return to their village.

“We have exhausted all the money we had saved, to book our flight tickets. We didn’t get any help from anyone to drop us at airport too, because of the intense lockdown. We knew there was no other option and hence decided to walk to the airport. We have taken water; so, whenever we got hungry mid-way, we just drank water to fill our stomachs and walked along,” says 22-year-old A. Badirul, who has been working at a construction site in the city for the last year.

Since construction work has been disrupted for the last three months, the workers have had no wages. “We have been spending money on buying water and food. And each of us paid ₹5,000 for the flight fare and saved some for the bus ticket too. So, we didn’t have any money to get to the airport,” he says.

For the last three months, the men have been growing more anxious by the day, after hearing of the surge in the number of cases in Chennai. Abdul Matin, a 22-year-old migrant worker also from West Bengal, says they have been living in fear, wondering if they would return home at all. “Our employer was not keen on us going back. But how long can we manage? One or two days, we survive without food, but beyond that, what do we do? Our money was slowly getting depleted and on many days, we would have just one meal to keep us going,” he says.

Will they return to Chennai? Yes, they say. When the city returns to normal and when construction activity is back in full swing and when they find a job, they say, they may come back here. “People of Chennai have been kind to us in the time we lived here. So, we wouldn’t mind coming back, but we don’t know when that will happen. For now, we want to just return to our village and see our families,” he adds.