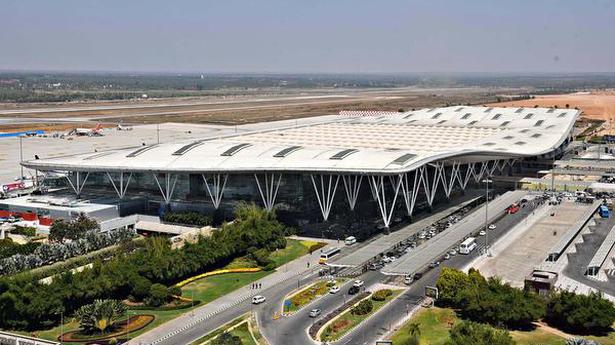 Taking the hopes of air passengers for multi-modal transport to the airport a step closer to reality, the Bangalore Metro Rail Corporation Limited (BMRCL) floated the tender to construct the metro line on a stretch of 38 km on Tuesday. The BMRCL is hopeful of starting construction work on the line to Kempegowda International Airport (KIA) from K.R. Puram in the first quarter of the next year.

The news comes days after it was revealed that the railway halt station on the boundary of KIA will be ready at the end of August, enabling the South Western Railway (SWR) to give a stoppage for trains being operated on the Yelahanka-Bangarpet line.

Ajay Seth, MD, BMRCL told The Hindu that the tender process will be completed by December so that the project can start in the first quarter of 2021. “The land acquisition is expected to be completed by September. All the work of shifting utilities, except a gas pipeline at one location, should get completed before the work is awarded,” he said.

As per the notification, the BMRCL has floated tenders for three phases. The first one from K.R. Puram interchange station to Kempapura metro station on an 11-km stretch. The BMRCL will build stations at Kasturinagar, Horamavu, HRBR Layout, Kalyanagar, HBR Layout, Nagawara, Veerannapalya and Kempapura and includes building a line to connect the existing Baiyappanahalli depot. The metro alignment runs on the median on the busy Outer Ring Road.

In the second phase, the project will be taken up between Hebbal and Bagalur Cross over a 12 km stretch. Stations will come up at Hebbal, Kodigehalli, Jakkur Cross, Yelahanaka and Bagalur Cross.

The third phase of the project will cover a distance of 15 km after Bagaluru Cross. The tender states that two stations will come up on this stretch at Bettahalasur and Doddajala. The BMRCL is building a 718-metre cut under cover line near Yelahanka air base. The tender work also includes widening of the road and removing utilities.

As per the plan, the Bangalore International Airport Limited (BIAL), the operator of the KIA, will build two stations inside the campus of the airport.

An official of the BMRCL said, “The 38-km line from K.R. Puram to KIA needs more than 3 lakh square metres of land. The BMRCL has already received land from the NHAI for building a viaduct from Hebbal to the trumpet interchange. On ORR from K.R. Puram to Hebbal, compensation has already been paid to a majority of the property owners barring five. For the rest of the line, compensation is being paid to property owners. We will complete the process as early as possible.”

THiS institutions beat pandemic fear, excel in board examinations