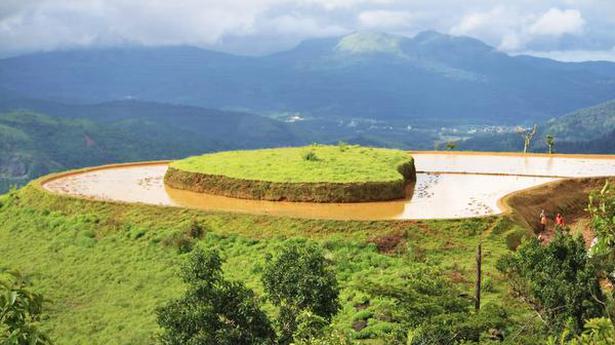 A paddy field on an elevated place, resembling the popular symbol of love, at Bamikonda near Samse in Mudigere taluk has attracted many people. Recently, the photos of the field went viral on social media, prompting people to enquire about the location. The paddy field, about an acre, is amidst lush green hillocks.

For years it has remained the same. Krishna Gowda, an owner of the land, said it was during the days of his grandfather Naggappa Gowda that the field was prepared for paddy and since then, the family maintained that shape. “It has been like that for more than 100 years. My father Veerappa Gowda and grandfather worked hard to make the land cultivable and kept the shape like that,” Krishna, 50, told The Hindu.

Now, three brothers, Suresh, Krishna and Vishwanath, look after the field, besides a coffee plantation. They till the land traditionally, with no machinery. Moreover, they cannot take machines to the field as there is no proper road. The road connectivity to Bamikonda, a hamlet of five houses and a homestay, is itself poor. “In the last four years, many people have visited our field to spend some time and take pictures,” said Mr. Gowda.