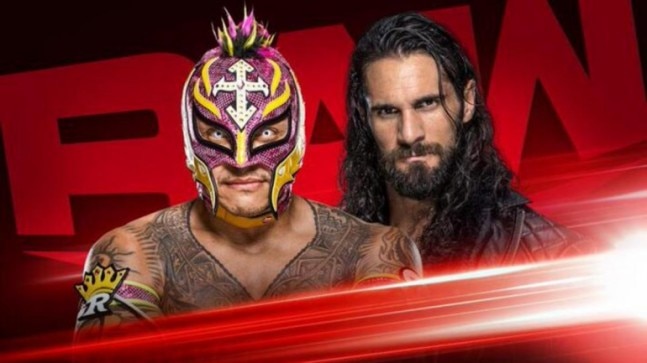 Rey Mysterio joined Monday Night Raw to give an update on his status. (WWE Photo)

Sasha Banks and Bayley surprised Asuka by coming ahead of Charlotte Flair as Monday Night RAW kicked off in a strange fashion. The match between Flair and Asuka was supposed to open the show, but due to the involvement of Sasha Banks and Bayley, Raw started with a tag match involving all six women.

The Queen arrived next, ready to shoo away the champions and start her match with The Empress of Tomorrow. Flair, who had lost the NXT women’s championship at NXT TakeOver: In Your House on Sunday, went on to register a satisfying win over Raw women’s champion Asuka in the main event. Next, Asuka and Flair humbled The IIconics and Sasha Banks & Bayley in the Triple Threat Match.

Rey Mysterio promised to get revenge on Rollins for what he did to him last week on the name of giving farewell. Rollins said that Mysterio was lying about the sacrifice he made a few weeks ago on Raw. Rollins also added that he was giving Mysterio one more chance to walk away a legend and invited Mysterio and his son to Raw next week.

However, the main attraction for this week’s Raw was reunion of Edge and Christian on the peep show, where the Rated-R was instilled with confidence ahead of his big match against Randy Orton at Backlash. Charly Caruso interviewed Randy Orton where the 12-time WWE Champion promised to appear on the talk show. At The Peep Show, Christian asked Edge if he’s truly ready for WWE Backlash and Randy Orton.