Home News National You object to reforms just for the sake of it, Modi tells... 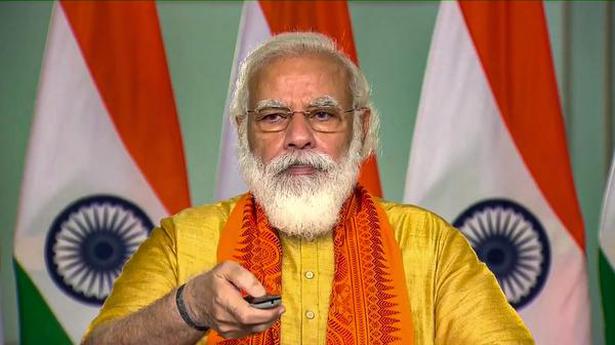 Prime Minister Narendra Modi on Tuesday launched a blistering attack on the Opposition, accusing them of opposing the reforms initiated by his government in the last six years “only for the sake of opposing”.

Mr. Modi was addressing a programme for the launch of projects in Uttarakhand under the Namami Gangey scheme. “Last month big reforms were initiated for farmers and workers of this country. Farmers have been freed from restrictions and can sell their products to anyone, but the certain parties with vested interests in keeping farmers shackled are opposing this. It was our government that brought in Minimum Support Prices [MSP] as per the Swaminathan committee report, but the Opposition is using propaganda to spread lies about the government,” he said.

“Four years ago, our brave soldiers attacked and destroyed terror launch pads across the border. But these people [Opposition parties) demanded proof of these strikes from our armed forces. By behaving thus, they clarified just where they stood with regard to the country.”

He accused the Opposition of blocking the legal resolution to the Ayodhya issue and then the Ayodhya temple bhoomipoojan (ground breaking ceremony).

Why none of the tall leaders of the Opposition had yet to visit the Statue of Unity, the monolith of India’s first Home Minister Sardar Patel, he said.