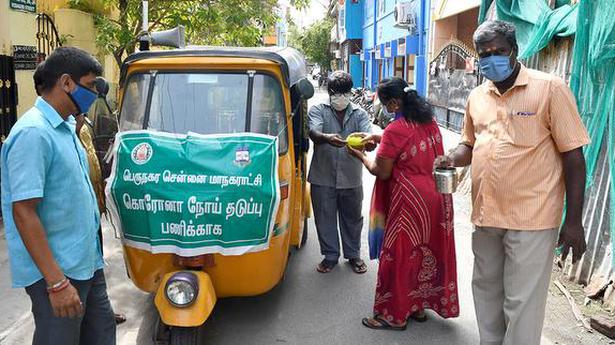 J. Anand’s childhood memories are centred around Agraharam Street in Adikesava Puram, a neighbourhood in Chintadripet. Memories of playing with friends on the narrow lane after school hours; of doing homework under a street lamp; of singing Carnatic songs during temple processions; of learning to cycle and later to ride a motorcycle, on the street.

Thirty-years-old now, Anand moved to the neighbouring Kovur Vaidyanathan Street a decade ago. However, during the lockdown, he has been walking down Agraharam Street, and adjoining lanes, as a resident-volunteer associated with the Greater Chennai Corporation.

Before the lockdown, Anand was working as a clerk with an advocate at the Madras High Court.

“Agraharam Street is an inseparable part of me, because that is where I was born. Before the lockdown, I would go for a walk on this street. Now, I do the same thing but to check on the well-being of my old neighbours, as a GCC volunteer,” says Anand, who lives with his mother in the neighbourhood.

Chintadripet comes under Ward 62 of Zone-5 (Royapuram), and in the initial weeks of the lockdown it registered high number of people testing positive for COVID-19.

Anand’s work includes distribution of the herbal health drink, Kabasara Kudineer, visiting houses in the locality, especially Adikesava Puram; and helping civic workers with the work of spraying disinfectants on streets, containment spots and houses, attending to the needs of residents in containment areas, especially buying groceries, vegetables and medicines for them. Besides, he also assists the local civic officials in paperwork.

At present, the civic body enrolls resident-volunteers under two categories, namely, sector volunteers and FOCUS volunteers based on the nature of the COVID-19 volunteering work.