Home Cities Delhi Youth files complaint of loot during Delhi riots, gets booked under the... 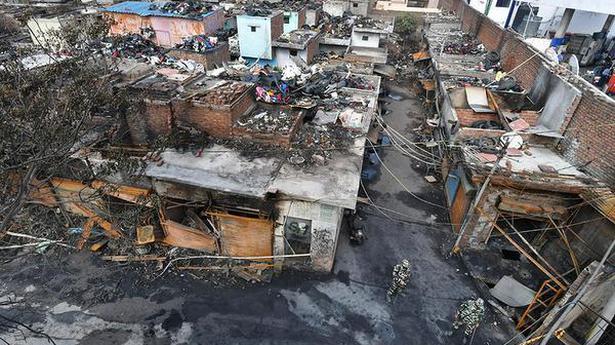 In a strange incident, a 24-year-old resident of Shiv Vihar was arrested in connection with the north-east Delhi riots, ironically in an FIR in which he was the complainant.

In a complaint submitted at Karawal Nagar Police Station on March 6, Abu Bakar claimed that his residence was allegedly looted during the riots. Bakar and his family had shifted to a safer zone on February 25 as tension mounted in his locality. But when they returned home on February 28, they found their house ransacked, and their valuables including cash and jewellery stolen.

On March 10, he was allegedly taken by Crime Branch officials and questioned for six-seven hours to identify people from the videos they were showing him after which he was let off.

However, on April 4, after the nationwide lockdown was announced, Bakar claimed the police summoned him to a nearby mosque on the pretext of discussing ration distribution. Instead, he was taken to the station and arrested in the same FIR number (on charges of rioting, mischief causing damage to the amount of fifty rupees, and mischief by fire or explosive substance with intent to destroy house) with which his complaint has been attached.

Bakar was released on bail on May 24 after a city court’s order on May 15.

His counsel Akhter Shamim argued that the police have registered an “umbrella FIR”. “In the court, there was an argument over the same topic in which the judge asked the police on how they are investigating the case as the accused and complainant are the same in the FIR. It makes the situation technical,” said Mr. Shamim.

When asked, an officer from Karawal Nagar police station expressed surprise on the information and said that “work is in progress in the same matter and each complainant among hundreds in being called to re-arrange complaints and their distribution in different FIRs; five Sub Inspectors are working on this”. Meanwhile, Deputy Commissioner of Police (North East) Ved Prakash Surya said that the youth’s complaint was received at the Idgah relief camp and was attached in the existing FIR. During investigation, video evidence was collected and it was found that he was the culprit and hence arrested.

Soon after his arrest, Bakar’s family received a call from the Karawal Nagar Police Station asking them to send him to the station with photographs of the vandalised house. His stunned family members told the officer that he was in jail.

After returning home, Bakar said that he is scared to visit the police station because of his earlier experience.

He also grieved that his family hasn’t received any compensation from the government and his monetary situation was bad. “We stayed in the Idgah relief camp till March 22 and submitted the relief forms but haven’t received a penny yet,” he said.